The first image from Paramount’s upcoming Clifford the Big Red Dog film reveals a sneak peek at the eponymous character in live-action, according to Meagan Damore from CBR.com… Support our news coverage by subscribing to our Kindle Nation Daily Digest. Joining is free right now! 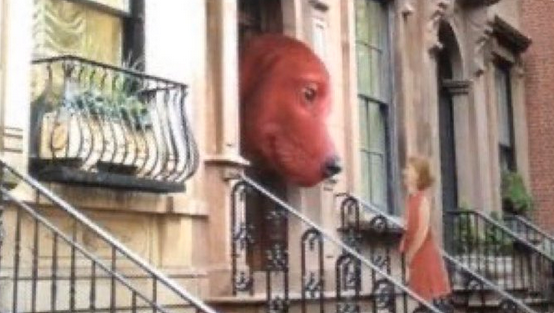 The image, which surfaced on Twitter, appears to be a piece of concept art. It shows Darby Camp’s Emily Elizabeth standing on the front steps of what looks like a New York City brownstone. Smiling, she gazes up at Clifford, whose enormous head barely fits through the doorway. The piece’s artist has not yet been revealed.

Published in 1963, Clifford, the Big Red Dog by Norman Bridwell was the first in a series of more than 40 more books about Emily Elizabeth and her gigantic pet. The last one, Clifford Makes the Team, was released in 2011, three years before Bridwell’s death. More than 60 million Clifford books are in print worldwide. The 25-foot dog has also made the leap to video, animated television and video games, but this is the first time the character has appeared in live-action.