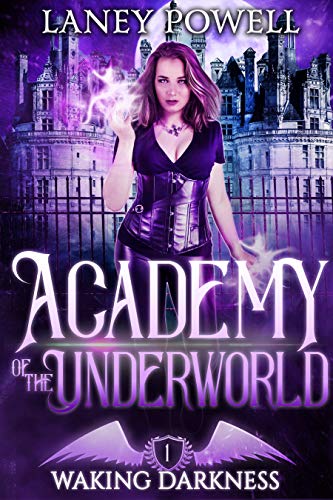 – Learn More
Text-to-Speech: Enabled
Here’s the set-up:
What do a sexy vampire, a broody demon, a dangerous necromancer, and a gorgeous reaper have in common?
Me.My life in the motorcycle club is pretty much what you’d expect. I was raised by my single dad, I know everything there is to know about fixing bikes, and while the guys in the MC are rough around the edges, they are family in all the ways that count.So when I grab my helmet and hit the road, what I don’t expect is the most irresistible urge to drive right off the pier—which is exactly what I do. As I sink into the depths, I see the most unexpected thing of all: my mother’s face.Next thing I know, I’m wrapped in a glowing net and surrounded by the magical police who claim I’m an undocumented siren, and I can either go with them or be harpooned on the spot. I don’t know the first thing about magic, but with a harpoon in my face, what choice do I have? That’s how I come to be the newest student at the Academy of the Underworld.

While trying to figure out where I fit in, I meet a demon, a reaper, a necromancer and a vampire, all of whom draw me in with the same irresistible call that brought me to the water in the first place. As if that weren’t enough, I’ve arrived just in time to be terrorized—personally—by the angry supernatural being who has already killed two people on campus. He calls to me in the night and I fear if I answer him, he’ll find where I’m hiding. Yay me.

All I want to do is get out of here, but between this whole magic siren thing, my classmates that tend to be more bully than friend, the voice in the night, and the four hot guys who make my blood race, I’ll be lucky to make it to tomorrow.

Academy of the Underworld is a college-aged reverse harem paranormal fantasy series about a badass siren and the four hot men who grow to adore her. Scroll up and one-click the start of your adventure into the Underworld!