Neil Gaiman appealed for warm scenes for his poem What You Need to Be Warm – and received ideas from everyone from Ben Stiller to Monica Lewinsky, according to Alison Flood from The Guardian… Support our news coverage by subscribing to our Kindle Nation Daily Digest. Joining is free right now! 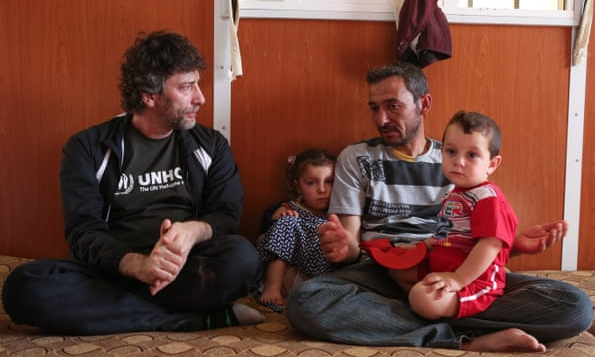 Coming up with his latest work was “ridiculously difficult”, Neil Gaiman admits. Last month, the Good Omens and American Gods author, who is also an ambassador for the United Nations High Commissioner for Refugees (UNHCR), asked his Twitter followers to tell him what reminded them of warmth. After receiving almost 1,000 responses – with Ben Stiller and Monica Lewinsky among those to contribute – Gaiman found himself with a 25,000-word document, from which he has composed his newest written work: a freeform poem to launch UNHCR’s Winter Emergency Appeal for refugees across the Middle East.

What You Need to Be Warm touches on everything from “a baked potato of a winter’s night to wrap your hands around or burn your mouth” to “the tink tink tink of iron radiators waking in an old house”.

“It was very intimidating. The original brief was, ‘Can you do a story with a plot?’, and what I’d figured was, we’d get 100 or so replies, I’d pick one that would somehow call to me, and write a short short story. What I wrote was much more of a reaction to sitting and reading 25,000 words of tweets, one after the other,” said Gaiman.

He described the writing process as “like trying to do the world’s most complicated crossword … It was ridiculously hard to write and especially hard when you know one of the engines of – for want of a better word – public poetry, is that it’s not a good idea,” he said. “Anytime you ever see something produced by a poet laureate about any royal event you think ‘Oh no, no’ … It’s that feeling that you’re doomed, but let’s go down as honestly and meaningfully as you can.”

Other suggestions ranged from “the sound of a cat’s purr” to “Grandma’s kitchen in foggy St Petersburg”; “pots of steaming tea so strong the spoon stands up” to “the smell of wet wool over classroom radiators”.