Blood of the Isir Omnibus: A Dark Fantasy Series 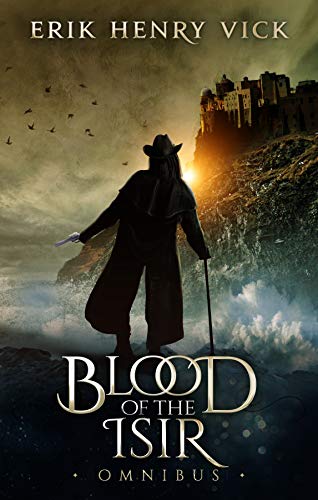 Hank is one of New York’s best criminal profilers and loves his job. But when he meets the Bristol Butchers, all that changes. He chases the pair of cannibals in spite of the disabling curse they cast on him, and in spite of their threats to his family. When he catches up to them, his horror begins. They claim to be gods, and they change into monsters before his eyes. Unable to stop them, the battle leaves him sick, despondent, broken. His career is at an end. His only respite is his family.

Years later, the Butchers return to make good on their threats. When his family disappears on Halloween night, Hank knows he must not give in to his disability, and he must not wait for others to intercede. The time for accepting the limits of his curse ended the moment the pair of twisted cannibals kidnapped his family.

When the evil duo flees across a shimmering portal into the mythical worlds of the Norse Sagas, Hank must follow. But they have the power to raise monsters, mythical beings–even the dead–to block his path. How can he, a broken mortal, overcome gods? How will he overcome his disability, his doubts?

Pick up the entire series in this single volume and follow Hank’s epic quest!