Save 80% with this Kindle Countdown Deal! 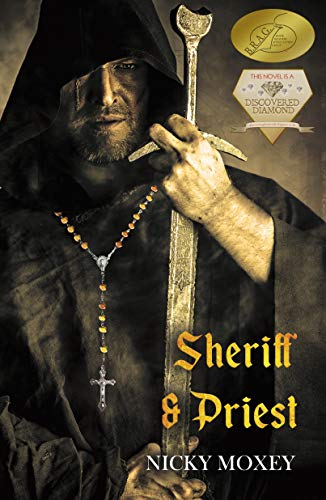 How can Wimer save his soul? The King’s mistress has the key… Sheriff And Priest: Wimer The Chaplain by Nicky Moxey" title="

How can Wimer save his soul? The King’s mistress has the key… Sheriff And Priest: Wimer The Chaplain by Nicky Moxey

– Learn More
Text-to-Speech and Lending: Enabled
Enjoy Nicky Moxey Books? Tell us why and WIN a chance for a FREE ebook!
Here’s the set-up:

Wimer the Chaplain – Saxon in a Norman world; friend of King Henry ll, excommunicated by Thomas Becket and the Pope – how can he save his soul? The King’s mistress has the key…

“This is a thoroughly enthralling story… A fascinating look into two friends’ lives during the 12th century. It is a well-written and researched historical tale” – Goodreads review

Wimer could have become a monk. Instead, his decision to become a Chaplain – to make his way in the wider world of men – has put his soul in mortal danger.

In 12th Century East Anglia, poor Saxon boys stay poor. It takes an exceptional one to win Henry II’s friendship, and to rise to the job of High Sheriff of all Norfolk and Suffolk. Falling foul of the stormy relationship between Henry and his Archbishop, he is excommunicated three times, twice by Thomas a’Becket, and once by the Pope.

He also falls in love with the King’s Ward, Ida. Before he plucks up the courage to do anything about it, the King takes her as his mistress, and Ida needs Wimer’s support to survive that dangerous liaison.

Although he is eventually reinstated in the Church, his problems with his religious superiors, and his love for Ida, will guarantee him a place in Hell, unless he can find land and resources to do something spectacular in the way of penance…