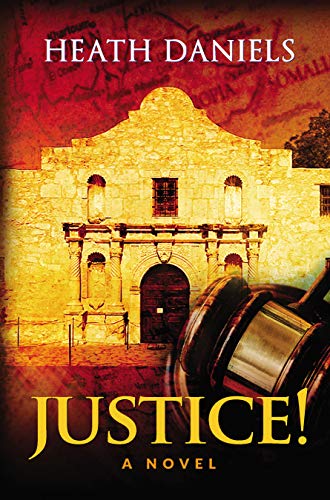 – Learn More
Text-to-Speech and Lending: Enabled
Enjoy Heath Daniels Books? Tell us why and WIN a chance for a FREE ebook!
Here’s the set-up:

Religion and Culture, the Same?

Justice occurs not only in courtrooms, but also in other situations. The story highlights how justice is achieved in other sadly commonplace situations. Action evolves around San Antonio, one of the country’s most cosmopolitan, multi-cultural cities, as well as through very diverse surrounding areas of south-central Texas, including brief forays into west Texas and New Mexico. The situations are not unique to Texas, but the story brings life to places that would otherwise remain obscure.

Action moves quickly focusing on tolerance, acceptance, and respect for all races, religions, and ethnic backgrounds. Is there justice in the United States for those who bring their culture into their interactions with society, expecting to be tolerated? Refugees from Somalia are resettled in a small, close-knit Hispanic community where they do not fit in. Residents of nearby locations take it on themselves to fight back against these outsiders.

Yusef, a brilliant, successful attorney with the U.S. Attorney General who is Shia Muslim, moves up in his career and is further challenged to separate Islam from cultural characteristics of the close-knit Lebanese Shia Muslim community of Dearborn, Michigan, where he grew up. Nistrine, a Shia Muslim whose family is also Lebanese, grew up in “worldly” Dallas, follows her religion, but has less cultural baggage. She demonstrates how a dedicated medical doctor serves society in a way true to her beliefs. The author has based the characters on persons he has known directly or indirectly; there are no stereotypes. Locations are actual.

An entertaining and informative good read to inspire and challenge perceptions.