The Rage of Plum Blossoms 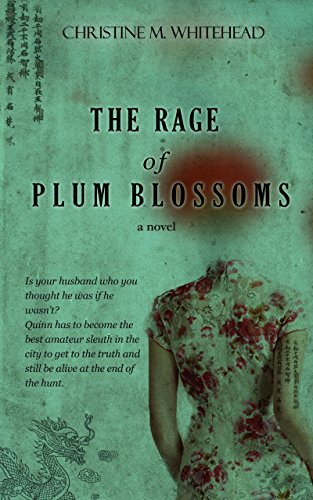 – Learn More
Text-to-Speech: Enabled
Enjoy Christine M. Whitehead Books? Tell us Why and Win a Free Book!
Here’s the set-up:
Kindle Scout winner and has been top 100 Mysteries on Amazon. # 1 for Women’s Adventures! Stephanie Plum meets The Good Wife!
Attorney Quinn Jones is in over her head. Her husband, Jordan Chang, Annapolis grad and superstar businessman, has been found dead outside their Greenwich Village brownstone.
He’s wearing clothes that aren’t his, and was last seen at a place he never went while consorting with people he shouldn’t–and he’s vastly richer than he ought to be, Quinn discovers. Since NYPD has labeled Jordan’s death a suicide, Quinn is on her own to uncover the truth. Courtrooms, Quinn knows. Chanel No. 5, horses, martial arts, and frizzy hair, she knows. Murder, she doesn’t know but she’s learning fast in order to stay alive.
With a few clues to work with, including a photo of Jordan with a stunning unknown Asian woman and a copy of a 1986 check payable to Jordan for twelve million dollars, Quinn stalks the back streets of Chinatown, haunted by the need to know what happened that day and why.

“An original and riveting mystery in which Christine Whitehead showcases a genuine flair for deftly crafting memorable characters and compelling twists and turns.” Reviewed by Midwestern Book Review