Epic Fallacy Trilogy: Contains Champions of the Dragon, Beyond the Wide Wall, The Legend of Drak’Noir 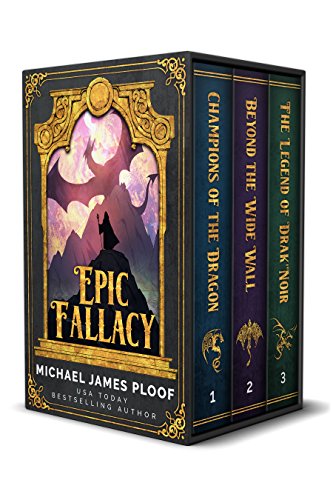 Murland Kadabra has always dreamed of becoming a great wizard. However, at age 19, the young apprentice has yet to successfully cast a single spell. He has been reduced to grounds keeper of Abra Tower, and has become the laughing stock of the wizarding school. But when the Most High Wizard Kazimir chooses him to be one of the five Champions of the Dragon, Murland’s life changes forever.

He soon finds himself traveling through the wilds with four unlikely companions, including an alcoholic knight, a gay elf prince, a dwarf with humanism, and an obese ogre. Prophecy dictates that these champions must march west to the shadowy peak of Bad Mountain, where they are destined to do battle with the dreaded dragon of legend, Drak’Noir.

But what few people know, is that the prophecy is not altogether true. For it is not five champions who Kazimir chooses, but five fools. They are not meant to defeat the dragon, but to feed her.

To change their fate, the Champions of the Dragon must not only overcome their enemies, but also themselves.

Epic Fallacy is a satirical high-adventure romp through the Fantasy genre in the tradition of Terry Pratchett’s Discworld series. Included in this bundle are books 1-3: Champions of the Dragon, Beyond the Wide Wall, and The Legend of Drak’Noir. This collection is 899 pages and 380,000 words.

“I am a huge fan of MJP and all of his Agora characters, so i knew i would be pleased with another tale from his magic pen. I waited for all three volumes of this adventure to come out so i could read them at once. What a wonderfully refeshing adventure it was. Old world fantasy meets modern day jokes and puns. These characters really had themselves one helluva adventure . Not your typical fantasy, but one you will enjoy reading. I look forward to more from our champions. Well done Mr. Ploof.“ – Amazon Review