BLUNT FORCE MAGIC: The Monsters and Men Trilogy-Book One 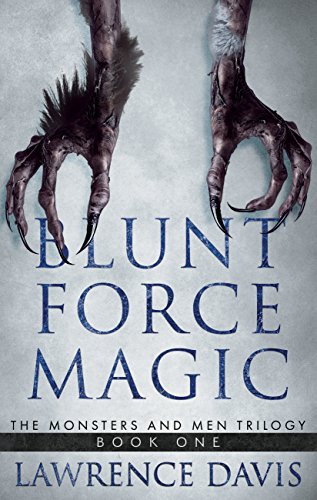 “A modern fantasy with a touch of noir, a dash of detective thriller, and a sprinkling of humor throughout. A really fun debut novel.”–Steve Jackson, New York Times bestselling author of MONSTER

Janzen Robinson is a man torn between two worlds. Five years removed from a life as an apprentice to a group of do-gooding heroes who championed the fight against supernatural evils, the once-promising student is now a package courier going through the daily grind, passing time at a hole-in-the-wall bar and living in a tiny, run-down apartment on the south side of Cleveland, Ohio.

Then fate (or a case of bad timing) brings him face to face with a door that’s got his old life written all over it. From the ancient recesses of unyielding darkness known as the Abyss, a creature has been summoned: a Stalker, a predator whose real name is forbidden to be spoken aloud. It’s a bastardization of the natural order, a formidable blend of dark magic and primal tenacity. Its single-minded mission? Ending the life of a fiery, emerging young witch.

Thrust into the role of protector, a role once reserved for those he’d lost years ago, the out-of-practice “Artificer” not only has to return to a life he’d left behind, but must relive that painful past while facing down the greatest threat to come to our world in a century. Janzen will have to journey through the magical underbelly of the city and not only stay one step ahead of an unstoppable monster hellbent on destruction but try and figure out why it’s been brought to our world in the first place. Past wounds are reopened as Janzen looks to old friends, a quiet stranger, and his own questionable wits to see them all to the other side of this nightmare that may cost him his life and, quite possibly, the world itself.

About the author: Lawrence Davis is a decorated U.S. Army infantryman who served three combat tours overseas, including in Iraq. His first book, BLUNT FORCE MAGIC, was written in part to help navigate the struggles associated with Post Traumatic Stress Syndrome (personified by The Stalker in his novel). He’s a shooting instructor and dog rescue advocate who lives in Florida with his four rescue pitbulls, and extremely patient girlfriend.