Lord of the Abbey (Lords of Avalon Book 1)

“The secret of the mystery, the hidden treasures of the Abbey, hidden at the time when the Crown went around destroying Catholic churches throughput the land, has got to remain concealed. Suffice to say, it is the greatest surprise in the entire story!…but to learn it prematurely here would spoil the thrill of learning as you read. For me, the possibility of such treasures was alone enough to make the reading worthwhile (especially since it could so easily have arisen out of local legend; definitely an issue worthy of research).
It was interesting and exciting, filled with intriguing individuals whose friendship the reader could feel as well. Not to mention the treacherous adversaries, capable of making the reader’s blood boil over some of their devastating deeds.
More than worth the reading! You will truly be delighted with this mystery.” – Amazon Review 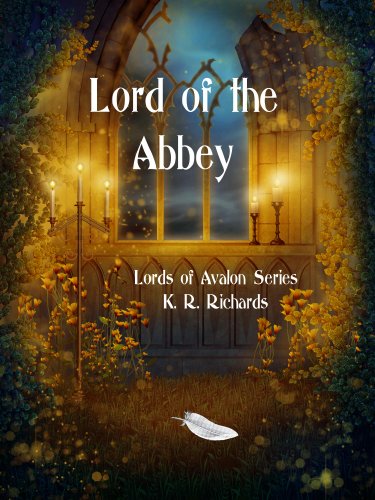 – Learn More
Text-to-Speech and Lending: Enabled
See more titles by this author!
Don’t have a Kindle? Get yours here.
Here’s the set-up:

Confirmed spinster, Lady Rowena Locke, seeks aid from Harry Bellingham, the Earl of Glaston and head of the renowned Avalon Society, a historical and paranormal Society, to find the lost Glastonbury treasures. Harry is not only interested in the treasure hidden by the last Abbot of Glastonbury before the dissolution of the Abbey, but he is also interested in Rowena.

When Harry and his fellow Avalon Society members step in to assist Rowena and her aunt on their quest, dangerous and mysterious men in brown coats and hats appear in Glastonbury. They are also searching for the lost Abbey treasure. It’s a race against time as the mysterious ‘Brown Coats’ seem to always be one step ahead of them. The Society finds more clues, treasures, letters, and holy secrets. Will they discover who the ‘Brown Coats’ are and why they are after the treasures? Can Harry convince marriage wary Rowena to trust in love and marry him?