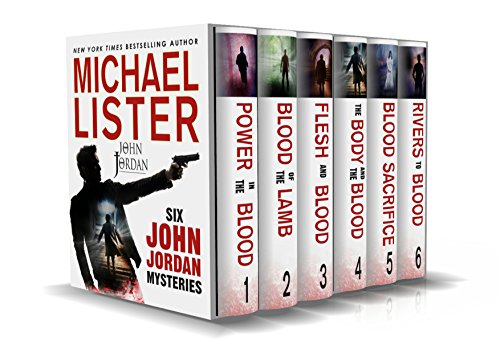 4.3 stars – 122 reviews
Kindle Price: FREE!
Text-to-Speech and Lending: Enabled
Don’t have a Kindle? Get yours here.
Here’s the set-up:

Power in the Blood

Ex-cop John Jordan, now a prison chaplain in the Florida Panhandle, witnesses the bloody death of Potter Correctional Institution inmate Ike Johnson. But what exactly did he witness? Murder, accident, or suicide? Jordan discovers that in the closed society of captives and captors no act goes unseen, and no one takes kindly to a cop in a collar. He soon finds his reputation, his career, and even his life are at stake.

Blood of the Lamb

John Jordan’s search for peace is interrupted by the unimaginable murder of the seven year-old adopted daughter of ex-con turned televangelist, Bobby Earl Caldwell. The murder is committed inside a locked office while Bobby Earl conducts a service in the Potter Correctional Institution chapel. The investigation forces John to confront his own fears and beliefs as he struggles to figure out his identity as well as that of the killer’s.

In this diverse collection of cases, John investigates the Shroud of Turin, a pregnant virgin, a daring prison break, a Hurricane Katrina orphan who might just be the Second Coming, a desperate woman who sleeps with one too many men, a bloody body on the rec yard, a mystery that turns on a single observation, and a murder in which John himself is the prime suspect—all this as he deals with depression and battles alcoholism.

Body and the Blood

In one of the most baffling murder cases of his career, John Jordan actually witnesses an impossible murder—one he would swear couldn’t have happened had he not seen it with his own eyes.

Attempting to balance his fragile reconciliation with his ex-wife and the high-stakes investigation, John is soon overwhelmed and wonders if the life he’s hoped for is even possible. But when he finally figures out how the crime was committed and who’s behind it, an exciting climax follows that reveals the shocking solution, sees someone close to John shot, and carries for John the ultimate personal price—one he’s not sure he can pay.

Following a particularly brutal and costly case, John Jordan goes to a secluded retreat center and encounters one of the most bewildering and haunting cases of his career—the suspicious death of a troubled and sexualized young woman undergoing an exorcism.

But is he dealing with forces not even he can understand? And what will it cost him?

John Jordan searches for an escaped prisoner, investigates a shocking murder, and confronts a sadist forcing his victims to violate themselves — all while trying to take care of his family, friends, and those in his care.

An escaped inmate. A shocking lynching. A harrowing river rescue. A thrilling mystery featuring a detective like no other!