When “Star Trek: The Next Generation” first aired in the 1980s, it envisioned a number of technological advances for humankind’s future. Set in the 24th century, the show featured 3-D printers, visors that could provide artificial sight and a virtual reality simulator. But perhaps its most prescient creation was the supercomputer onboard the ship. The software — usually referred to only as “Computer” — could locate people, open doors and retrieve answers to complicated questions. Jenna Wortham explores the parallels between Star Trek and Alexa in The New York Times Magazine. 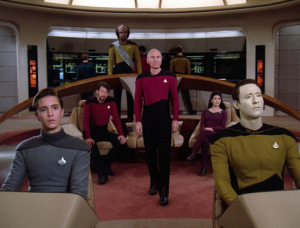 Amazon brought a version of that computer to life recently — albeit a few centuries earlier than “Star Trek” predicted. Last July, David Limp, a company executive who works on the product, said in an interview with Fortune that the idea of an all-knowing machine, with access to all the world’s information, had captured his imagination since the first time he saw it on television. It took, he said, a team of 1,000 engineers to write its code, and when the device was finished, Amazon decided to call it Alexa, shorthand for Alexandria, as in the ancient Library of Alexandria in Egypt. It is designed to work primarily with a suite of wireless speakers, also made by Amazon, called Echo, Echo Dot and Tap.

Read the full post in The New York Times Magazine.