Amazon is constantly adding new features to entice customers to sign up for its $99 a year Prime membership. The result is a hodgepodge of content and products associated with the membership – from TV series to diapers. Monica Nickelsburg looks at the best of Prime in 2016 on GeekWire. 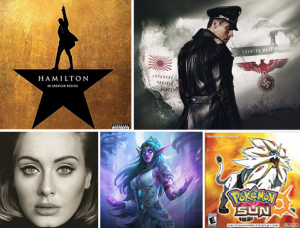 Amazon has released a list of the top-performing Prime items from 2016, including original content from Prime Video, audio from Prime Music and Audible, household goods, and products from Amazon’s growing gaming wing.

The list doesn’t reflect the top items from Amazon’s overall e-commerce business. It’s specific to content and products available for free or exclusively for purchase through Amazon Prime:

Most watched original series: The Man in the High Castle

Most played song: “Hello,” by Adele

Most popular Prime-eligible audiobook: No Excuses: The Power of Self-Discipline, by Brian Tracy

Most popular Audible Channel: Get Smart: You’ll be Amazed