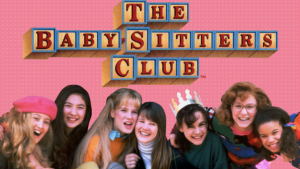 The first book in the series, “Kristy’s Great Idea,” celebrated its thirtieth anniversary this year. Set in the fictional town of Stoneybrook, Connecticut, the early B.S.C. books follow the exploits of the club founder and president, Kristy Thomas; the vice-president, Claudia Kishi; the secretary, Mary Anne Spier; and the treasurer, Stacey McGill. Together, they hash out a business plan, design a company logo, advertise to potential clients, and brainstorm special marketing features—such as the Kid Kit, a personalized box of arts and crafts and other indoor activities for babysitting charges. The members hold regular meetings in Claudia’s room, chosen for its access to a landline phone and hidden stashes of junk food; keep orderly records, logging everything from hourly rates to children’s allergies; and establish clear rules and consequences for not following them (sitters who show up late to meetings or jobs lose privileges). Martin was careful to make clear to her readers that the girls came up with all of this on their own. “I felt it was important for them to create the rules themselves—for the rules not to be imposed on them or even suggested to them by an adult,” she told me. For many of us, the Baby-Sitters Club offered an early glimpse into the world of ambitious working women. Granted, they were middle-schoolers, but they were girl bosses, role models long before pop culture gave us Olivia Pope, Liz Lemon, or Leslie Knope.