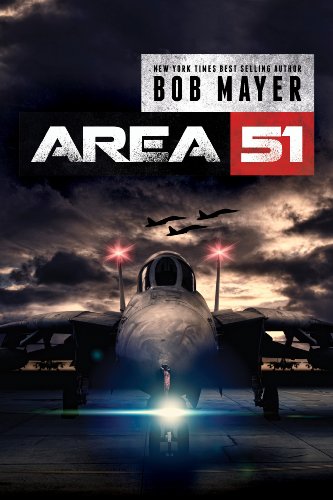 Special ops soldier turned New York Times best-selling author Bob Mayer’s Area 51 series is currently available for just $3.99 per title. Blending espionage with sci-fi and fantasy, these books are a fast-paced roller coaster ride through humanity’s distant past here on Earth, and its possible future among the stars.

Since before the dawning of modern man, an alien mothership and nine abandoned flying saucers have been hidden away in Area 51, a top-secret military base in the Nevada desert. There, scientists have studied the crafts, hoping to unlock the secrets of the alien technology and, perhaps, the origins of life on Earth. But now a deranged general wants to activate the mothership’s interstellar drive—and the consequences could prove catastrophic for humankind.

Dr. Hans Von Seeckt—an elderly scientist, ex-Nazi, and original member of the Area 51 research team—joins up with the president’s science adviser, Dr. Lisa Duncan, and Special Forces officer Mike Turcotte to put a stop to the planned test flight and tell the public the truth about Area 51. Meanwhile, a brilliant archaeologist, Professor Nabinger, discovers a message on runes found in ancient Egypt that could change everything we think we know about human evolution and the role that alien visitation may have played in it. 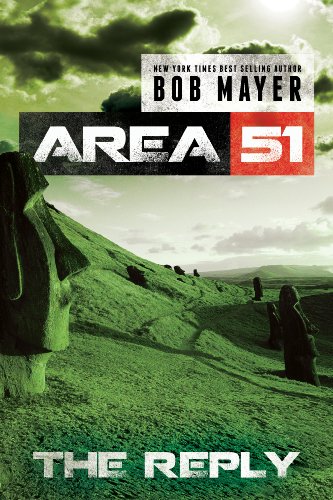 When they uncovered the truth about Area 51, scientist Lisa Duncan and Special Forces officer Mike Turcotte revealed the secret history of decades of UFO sightings and extraterrestrial contact. But that history goes back much further than they could have possibly imagined…

Hidden deep beneath the waters around Easter Island is a giant supercomputer called the Guardian, and it has just sent a message into outer space. When the reply comes, it will signal the execution of an alien plan millennia in the making; after five thousand years, “they” are coming back. But who are they and what do they want?

As the extraterrestrials race toward Earth, Duncan and Turcotte must scramble across the globe, from the Rift Valley of Ethiopia to an ancient Chinese tomb, to determine the aliens’ true intentions. If they fail, first contact with these visitors could mean last rites for the human race. 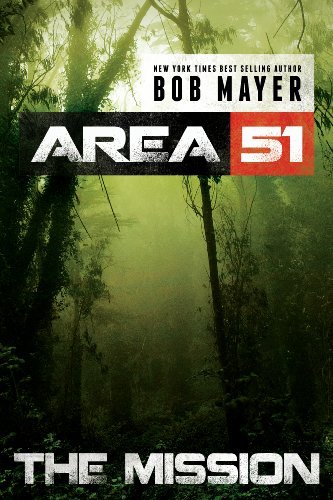 The bubonic plague was a trial run. Ebola was a dress rehearsal. The real destruction begins now, and, if the Airlia are successful, the result will be total annihilation of the human race…

Deep in the Amazon rain forest, villagers are falling to an unseen enemy—a brutal virus that inflicts plague-like symptoms and certain death. There’s no cure for this Black Death, only the threat of imminent worldwide contagion. And the source, it seems, is not organic.

Scientist Lisa Duncan and Special Forces officer Mike Turcotte suspect the Airlia. Now that Area 51 has been exposed and a fleet of the aliens’ warships destroyed, the virus could be the Airlia’s last weapon. Duncan and Turcotte believe the source of the virus—and possibly their salvation—may lie with a mysterious place called the Mission, where they hope to give humankind a chance at survival. But the battle has only begun… 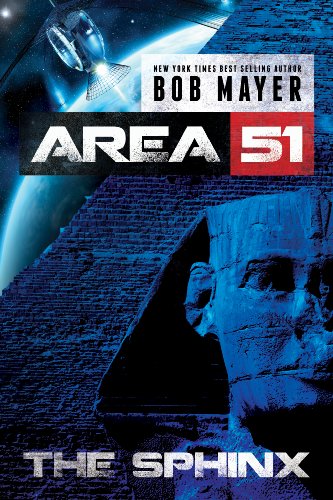 Dr. Lisa Duncan and Special Forces officer Mike Turcotte know better than anyone that no secret is safe for long—especially one that offers untold power. Case in point: no sooner does Turcotte’s elite Area 51 team uncover a dormant alien ship in earth orbit than a group of alien-human hybrids seizes it and uses its technology to commandeer a satellite array bristling with nuclear missiles. Now they’re demanding that humankind hand over the key to an ancient stash of alien technology…or watch an entire continent be reduced to atomic rubble.

Doom seems certain, as the required key is believed lost to the ages—until an unwitting anthropologist discovers the first of many clues to its hiding place. As Duncan and Turcotte race to reach the key—and the powerful treasure it can unlock—ahead of their alien foes, the quest leads them deep into a deadly maze within the Great Sphinx of Giza. The prize? Nothing less than the legendary Ark of the Covenant. 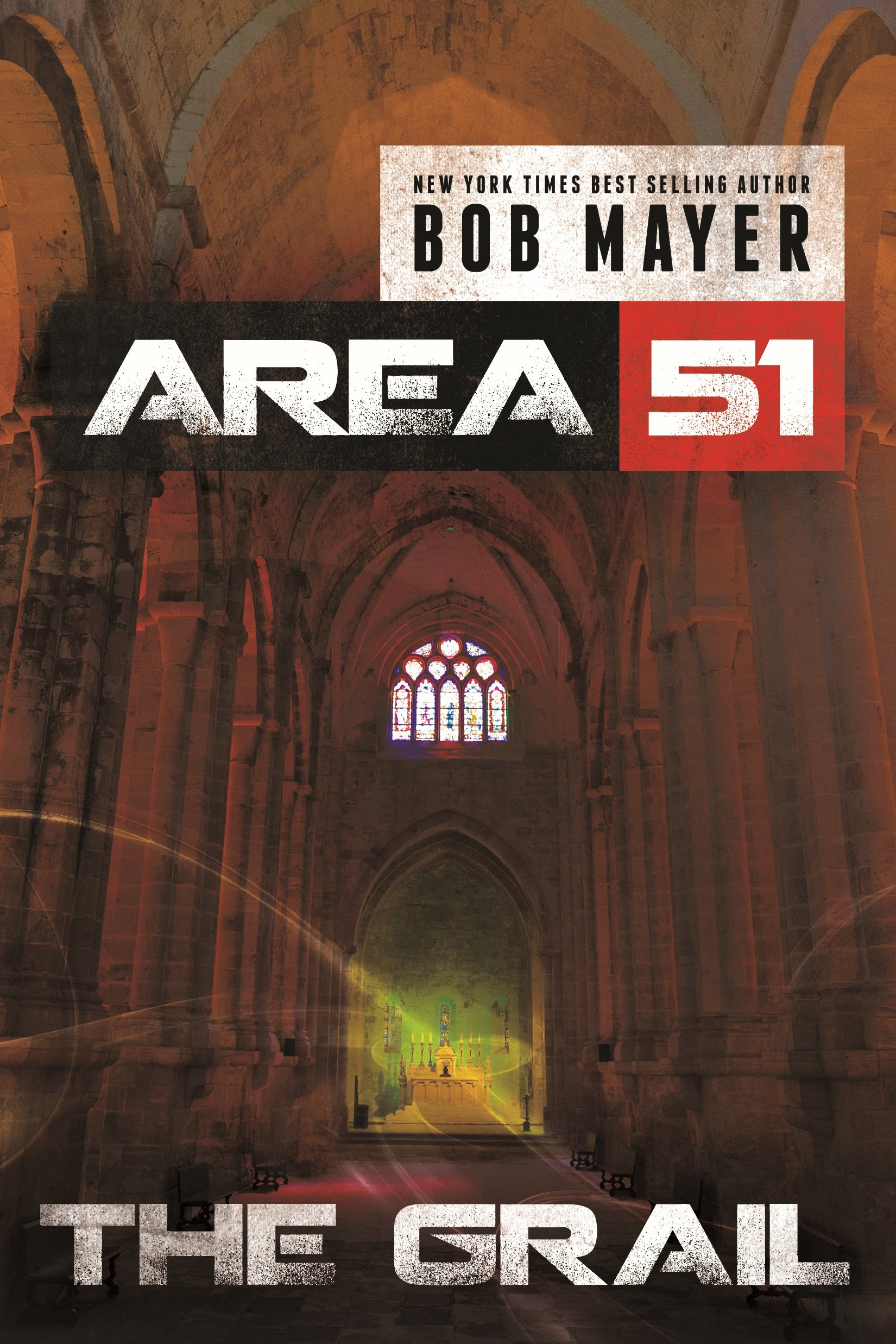 Scientist Lisa Duncan has found the legendary Holy Grail. But can she keep it out of enemy hands?

That enemy is the Airlia, frighteningly sophisticated extraterrestrials who came to Earth millennia ago and left behind ancient riddles in the form of the Great Wall of China, the Egyptian pyramids, and the statues of Easter Island. Now the aliens have returned to take over the planet.

A team of Area 51 soldiers and scientists race to find the Airlia’s keys to power—including the Grail—before the aliens do. But with Lisa surrounded by the Airlia at the Great Sphinx of Giza, her lover, Special Forces officer Mike Turcotte, must launch a daring rescue…and make an impossible decision: save the girl or the Grail? 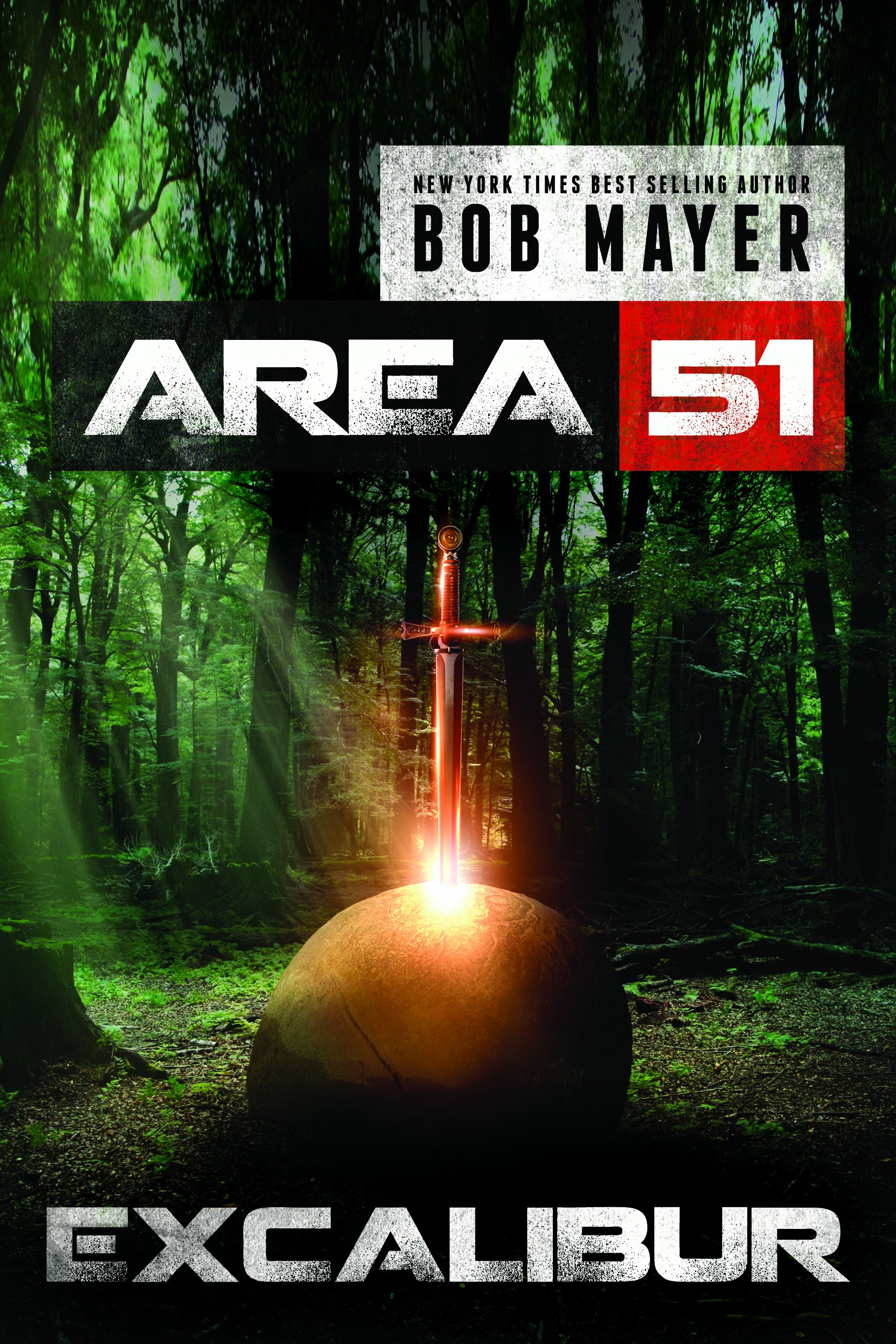 In his time at Area 51, Mike Turcotte has learned one thing: we are not alone. As part of an elite Special Forces team, the former Green Beret has encountered things that are well beyond human understanding. Now, two ancient rivals from another world are vying to dominate Earth, and Mike and his team must choose which army to side with. The key to averting the crisis lies in a single weapon: Excalibur. The mythical, legendary sword of King Arthur is real and can unlock a galactic power beyond what anyone—human or alien—has ever seen. And Mike must keep it from falling into the wrong hands.

The race to recover Excalibur will lead the players all across the globe—from the ancient pyramids to the Great Wall of China, from a fortress on Easter Island to the heights of Mount Everest—in a high-stakes game in which the fate of humanity is the ultimate prize. 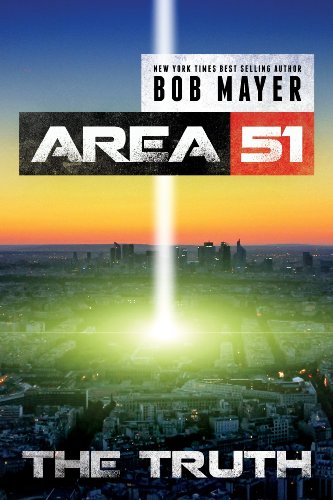 Mythological artifacts become a modern arsenal in a millennia-long interstellar battle. On one side stands the alien race that styled itself as gods to secretly steer human evolution. On the other is an elite team of Area 51 commandos, dedicated to freeing humanity from their interstellar overlords.

Special Forces officer Mike Turcotte and his former lover Lisa Duncan are among the few who know the truth about the extraterrestrial threat—and have the power to fight it. But can they save the human race from eradication or just act as pawns in an elaborate plot to enslave the planet?

Having just retrieved the legendary sword Excalibur—in actuality the control key to an alien mother ship—from atop Mount Everest, Turcotte rejoins the fight, intent on ending the ancient, bloody conflict once and for all. Yet even as he tries to avert a nuclear holocaust, a deadlier, more insidious alien foe hides in the shadows, waiting for the chance to alert its kind that Earth is ripe for conquest. 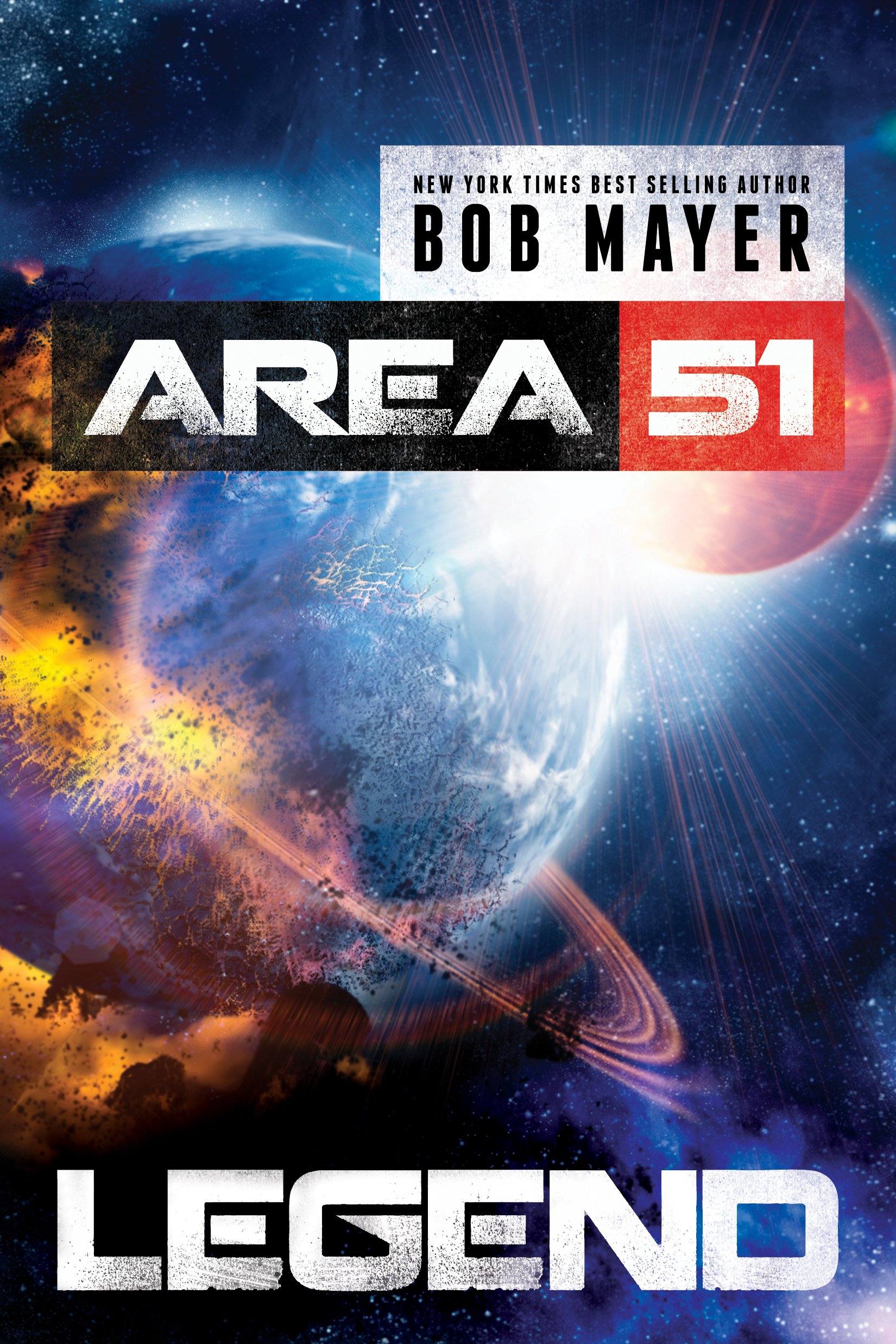 Donnchadh and Gwalcmai were birthed on a far-flung planet in the Milky Way—a human breeding colony with the purpose of churning out disposable foot soldiers. But the masters of the colony, the Airlia, created humans with one fatal flaw: an insatiable thirst for freedom.

Though Donnchadh and Gwalcmai become God-killers in the bloody revolt against their seemingly omnipotent creators and captors, their planet is already doomed. So when they discover the Airlia have enslaved a human colony known as Atlantis, the pair of freedom fighters journey light-years to spare Earth from sharing their planet’s fate.

Armed with superintelligent weapons and technology that the primitive earthlings could never foresee or understand, Donnchadh and Gwalcmai engage in a stealth battle spanning millennia and continents, from the land of the pharaohs to ancient Rome to the realm of King Arthur. They watch over each other as comrades and lovers, waiting for the moment when Earth can become the final battleground for human freedom.

Tech Tip of the Week: Alexa 101: For Anyone Giving Or Getting An Alexa Device