Amazon’s got some terrific deals on popular series running this month, including one on the Montana Sky series.

The series includes such titles as:

When her brother announces his marriage, Elizabeth Hamilton suddenly becomes unwanted and unwelcome in the only home she’s ever known. To escape the new mistress of the house, Elizabeth accepts the invitation of her best friend to journey to Montana.

The dirt streets and wooden storefronts of Sweetwater Springs and the hardships of ranch living are worlds away from the refinements of Gilded Age Boston, yet Elizabeth is filled with new hope—and buoyed by a wealthy banker’s attentions. Yet it’s cowboy Nick Sanders who slowly awakens her heart and helps her recognize her strengths. And when a deadly influenza epidemic strikes, Elizabeth will fight for those she loves—and the life she’s ready to claim. 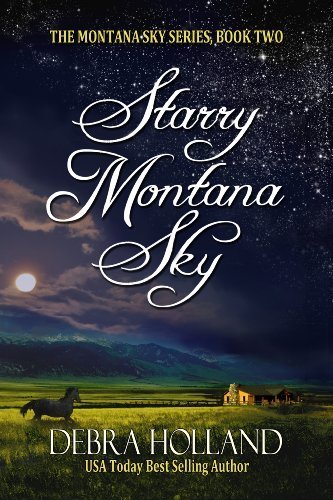 Since her husband’s death, Samantha Sawyers Rodriguez and her son have been little more than prisoners on her father-in-law’s estate in 1890s Argentina. Now, thanks to her late uncle, she has an inheritance—a Montana ranch that she plans to transform into a sanctuary for orphaned boys while raising her family’s miniature horses.

Not everyone in Sweetwater Springs, however, is happy about her arrival. Samantha’s neighbor, Wyatt Thompson, insists she has no idea what she’s taking on—with the ranch or with the neglected boys she’s adopted. Though she can’t deny her attraction to Wyatt, Samantha intends to succeed on her own terms. But when a string of fires turns the locals against her boys, she and Wyatt see all they have to lose—and gain—in this wild and beautiful country.

Sweet, heartfelt, and filled with adventure, Starry Montana Sky is an unforgettable follow-up to Debra Holland’s acclaimed USA Today bestselling romance Wild Montana Sky, filled with characters as bold and free as the land they love.

Schoolteacher Harriet Stanton has always believed in happily ever after. Only, the one she thinks she wants forever with is newly married…just not to her. But when a mysterious stranger rescues Harriet from an accident, she discovers heroes can be found in the most unlikely places…

Newspaper reporter Anthony “Ant” Gordon is a man on a mission. He’s determined to find the man who murdered his sister and kidnapped his young nephew, David. The one thing that almost stops him in his tracks? Saving lovely Harriet from a dangerous encounter. Harriet insists on repaying Ant by helping David recover from his ordeal. And David’s not the only one enchanted by the patient teacher…Ant has resolved to keep his eyes firmly focused on his business—and firmly off the woman hired to help his nephew. But now, with their lives suddenly on the line, they must decide whether to risk their hearts too.

In New York Times bestseller Stormy Montana Sky, Debra Holland returns to the beloved small town of Sweetwater Springs, where love can heal the most wounded of hearts.