First, Kill All The Lawyers (The Cleary Case Files Book 1) 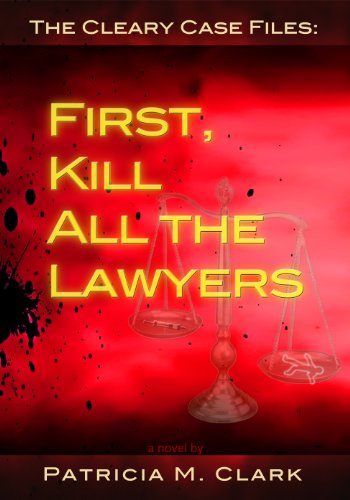 4.0 stars – 260 reviews
Kindle Price: 99 cents
Text-to-Speech and Lending: Enabled
Don’t have a Kindle? Get yours here.
Here’s the set-up:

It’s true what Shakespeare wrote about killing lawyers being a good start. At least that’s what Sgt. Edward Pulaski secretly believes when attorneys start popping up dead all over Washington, D.C. in the thriller, First, Kill All The Lawyers. If reporters could be next on the hit list all his dreams would be fulfilled. An obscure poison, no suspects, and no forensic evidence hinder the investigation until a federal judge is the target and Pulaski’s friend, FBI agent Shawn Cleary, joins the task force.

Shawn, fresh from a shootout that may leave her partner a quadriplegic, throws herself into the investigation to assuage her guilt and stop the horrible flashbacks of the event. As the body count rises and crosses state lines, lawyers from across the country begin to panic and demand action. Patterns emerge as pieces of the puzzle begin to come together.

The breakneck pace accelerates until Sgt. Pulaski reluctantly realizes all the clues lead to Shawn Cleary as the main suspect. She does nothing to dampen his suspicions when she flees instead of turning herself in. Worlds collide when powerful people in Washington seem more interested in a shoot to kill order than capturing Shawn alive. Pulaski is torn when Shawn calls him professing her innocence.

Working both inside and outside the system, Pulaski and Shawn continue to connect all the dots until the killer’s next move becomes obvious. Aware her life hangs in the balance, Shawn tells Pulaski she is determined to save someone she loves and capture the killer before he gets away. Pulaski must choose between trusting a friend and doing what his bosses want. As Shawn races to the historic theater where the climax awaits, she prays she can make it in time while Pulaski wonders if he made the right choice.

“I found myself guessing who might be the killer throughout the book. It was spellbinding.” ★★★★★5 star Amazon review