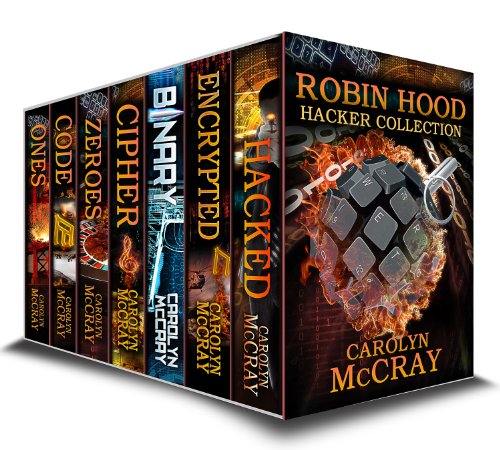 Encrypted – the first book in the #1 techno-thriller series. A code written in unbreakable Angelic script. The resurgence of the Black Death. Can an FBI Agent and the Robin Hood Hacker save the world from another Dark Ages?

Binary – the bridge short story between Encrypted and Cipher.

Cipher – the second book of the series. The Hidden Hand has struck again, this time with a weaponized Influenza virus set to kill over a quarter of the world’s population. Can the Robin Hood Hacker and her FBI boyfriend find the cure before countless millions die? From Mardi Gras to the Buckingham Palace and the Berlin Wall, our heroes lives hang in the balance.

Zeroes – the EXCLUSIVE short story bridge between Cipher and Code.

Code – the final book of the trilogy, currently available exclusively in this box set.

Ones – the EXCLUSIVE post-Code short story!

Praise for Robin Hood Hacker…
“I’ve read all the books and this box set is amazing value…I didn’t know what to expect but I got an exciting roller coaster read that was fast paced and thoroughly enjoyable. Hence, I couldn’t stop reading the rest of the series! Do yourself a favour, save yourself some time and money by buying the set.”
– Kizzle79, Amazon Reviewer

If you enjoy the intrigue of The Bourne Identity, the historical texture of Dan Brown, and the roller coaster action of Indiana Jones, you are going to LOVE The Robin Hood Hacker Collection!