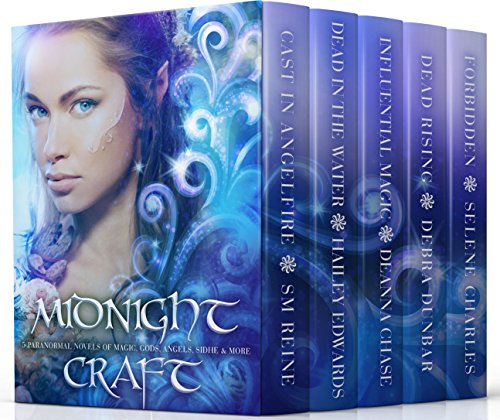 Cast in Angelfire by SM Reine
Marion is the teenage daughter of Metaraon, the Voice of God. Now it’s time for her to take over the family business. Including the parts where everyone wants her dead.
Lucas Flynn is a doctor as good with a gun as he is with a scalpel. And he’s hellbent on protecting Marion now that she’s lost her memories…

About Dead in the Water by Hailey Edwards
Camille Ellis is the Earthen Conclave’s golden girl. Her peculiar talent solves cases with a single touch, and she isn’t afraid to get her hands dirty.

About Influential Magic by Deanna Chase
It’s tough being a faery in New Orleans, a city fraught with vampires… especially when their very existence drains your life-force.

About Dead Rising by Debra Dunbar
Solaria Ainsworth was born a Templar, destined to take up the mantle of responsibility and duty as her family’s Order had done for hundreds of years. Except she refuses to take her Oath of Knighthood. Modern Templars believe only God should judge, but Aria must do exactly that or watch the Baltimore streets run red with blood.

About Forbidden by Selene Charles
Welcome to Whispering Bluff, Tennessee. Where the guys are hot. The girls are sweet. And nothing is what it seems…