EMOTION MARKET: which emotion would You buy? : a Mystery Thriller 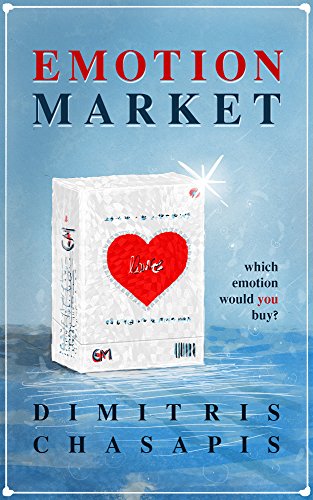 4.9 stars – 7 Reviews
Kindle Price: $2.99
Or currently FREE for Amazon Prime Members Via the Kindle Lending Library
Text-to-Speech and Lending: Enabled
Don’t have a Kindle? Get yours here.

Doctor Caroline Emerson, a Nobel Prize winner in Medicine, is a guest on Mary Ann West’s wildly popular show 10 with Mary Ann. The interview is viewed live by 500+ million viewers.
The doctor’s prize-winning patented tech is being implemented and offered to the public, but not everyone is enthusiastic about the innovation – to put it mildly. Emotion Markets start to operate in major cities around the globe. Citizens are finally able to buy emotions and control their intensity!
Caroline’s dream of helping people by allowing them to improve the psyches and eliminate negative emotions is finally becoming a reality. She knew society would be better for it.
However, there is intense social unrest created by skeptics and opponents of the idea. The industries affected by the operation of emotion markets are many and they unite for the first time against the common enemy. The powerful pharmaceutical companies are particularly displeased. Emotion Markets quickly become the new trend for citizens of many countries who are desperately looking for a way to take charge of their emotions…

US President Walters and Congresswoman Parsons support the idea and promote a controversial reform law integrating invasive procedures in Emotion Markets into Americans’ Health Insurance.
Caroline Emerson tries to find the balance between the ideal and the practical, moving her research into unexplored territories for the mind and emotions.
The ethical dilemmas are enormous while communities try massively for the first time in human history, to understand, evaluate and ultimately respect the value of their emotions.

In view of the results of extensive clinical trials, the society is eager to finally take control of their emotions and millions intentionally become the guinea pigs for this medical-tech breakthrough that promises hope, but also,as many critics are quick to point out, entails incalculable risks…

“A fascinating book that makes you realize how difficult it would be to make such decisions about your emotional self. Wild thinking on behalf of the writer. Can I have my EIP now?”

“It was a huge surprise to read such a unique premise from Dimitris Chasapis’ debut novel! Very well written, solid characters that interact, and a plot that keeps you guessing and hoping… Definitely buying the next one on the series!”