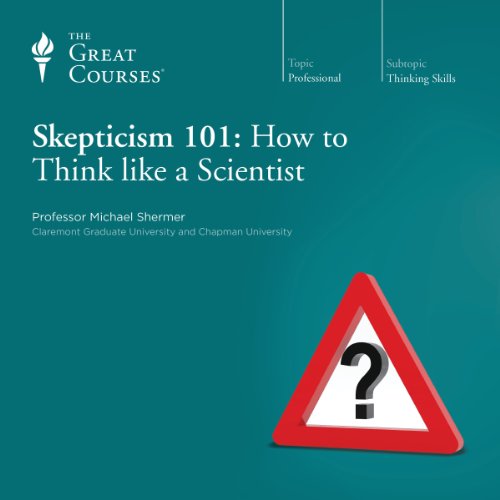 Today’s Audible Daily Deal, Skepticism 101: How to Think like a Scientist (5/5 stars, priced at $3.95 TODAY ONLY), is a great pick for anyone who wants to learn how to think more critically.

In today’s information age, where urban myths, scams and pseudoscience are supercharged by the power of the internet, it’s more important than ever to be able to separate fact from unsupported claims and fiction. From Amazon:

Despite our best efforts, we’re all vulnerable to believing things without using logic or having proper evidence-and it doesn’t matter how educated or well read we are.

But there is a method for avoiding such pitfalls of human nature, and it’s called skepticism. By using rational inquiry and seeing subjects from a scientific perspective, we can approach even the most sensitive claims with clear eyes to ultimately arrive at the truth.

During 18 lectures that will surprise, challenge, and entertain you, you will learn how to think, not just what to think-and you’ll come to understand why extraordinary claims require extraordinary evidence.

You’ll discover how skepticism can help differentiate between real science and pseudoscience, as well as between “scientific” history and pseudohistory-distinctions that have serious educational and political implications.

Fascinating case studies illustrate how you can apply the methods of skepticism to detect specious claims and faulty logic in any scenario you encounter such as:

As you learn how our brains work to form beliefs, you’ll examine the classic fallacies of thought that lead us to experience mistakes in thinking and to form bad arguments in favor of our beliefs.

Is there a God? Is there life after death? Is there a basis for morality without God? Skepticism 101 doesn’t shy away from controversial questions, nor does it give final answers. What it offers are methods and hard evidence for rationally evaluating various claims and positions, and an opportunity to understand why you believe what you believe.