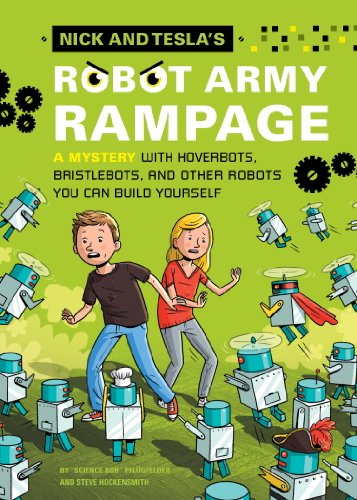 The Nick & Tesla series of chapter books are perfect for kids aged 9 – 12 who love technology, spy gear, and figuring out what makes things work. Each book includes project instructions kids can follow (with adult supervision) to actually build the simple electronics and gadgets, and make the mixtures, featured in the books.

Nick and Tesla’s Robot Army Rampage: A Mystery with Hoverbots, Bristle Bots, and Other Robots You Can Build Yourself (4.5/5 stars, currently priced at $9.99)

Nick and Tesla return in an all-new, robot-filled adventure!

When a rash of robberies hits the town of Half Moon Bay, 11-year-old sleuths Nick and Tesla are determined to catch the criminals—but to do so, they’ll have to build a host of new gadgets and gizmos! In this robot-themed follow-up to Nick and Tesla’s High-Voltage Danger Lab, the brother-and-sister duo build four different droids out of ordinary household objects—and illustrated instructions are included throughout the story, so you can build them, too! Make bristlebots that buzz, hoverbots that float above the ground, battlebots that duke it out, and more! Can Nick and Tesla catch the criminal mastermind—and foil his army of rampaging robots—before it’s too late? 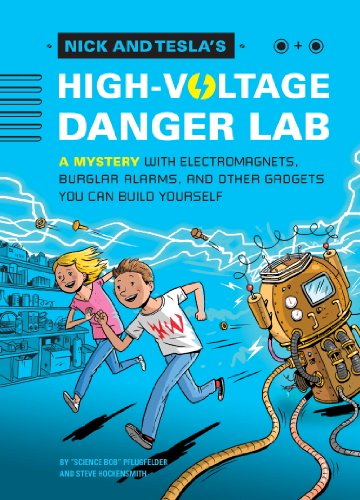 Nick and Tesla’s High-Voltage Danger Lab: A Mystery with Electromagnets, Burglar Alarms, and Other Gadgets You Can Build Yourself (4.5/5 stars, currently priced at $9.99)

Nick and Tesla are bright 11-year-old siblings with a knack for science, electronics, and getting into trouble. When their parents mysteriously vanish, they’re sent to live with their Uncle Newt, a brilliant inventor who engineers top-secret gadgets for a classified government agency.

It’s not long before Nick and Tesla are embarking on adventures of their own—engineering all kinds of outrageous MacGyverish contraptions to save their skin: 9-volt burglar alarms, electromagnets, mobile tracking devices, and more.

Readers are invited to join in the fun as each story contains instructions and blueprints for five different projects.

In Nick and Tesla’s High-Voltage Danger Lab, we meet the characters and learn how to make everything from rocket launchers to soda-powered vehicles. Learning about science has never been so dangerous—or so much fun! 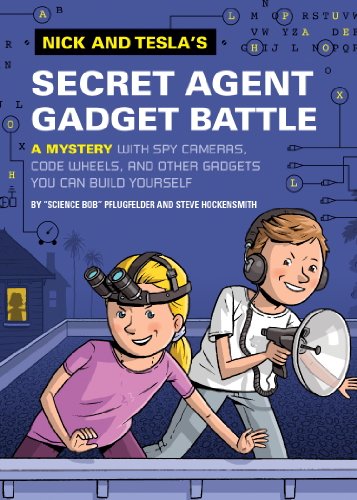 After foiling a gang of kidnappers and fending off an army of robots, 11-year-old siblings Nick and Tesla Holt could use a little rest!

But as their third mystery opens, they discover there’s a spy in their midst, searching for secrets in the home of their beloved (and slightly crazy) Uncle Newt. Is it the new laboratory assistant? The exterminator? The housekeepers? Or someone completely unexpected?

To expose the mystery agent, Nick and Tesla must engineer all kinds of outrageous contraptions, from code wheels and fingerprint powder to spy cameras and burglar detectors.

Best of all, instructions are included throughout the story, so you can build the projects, too! 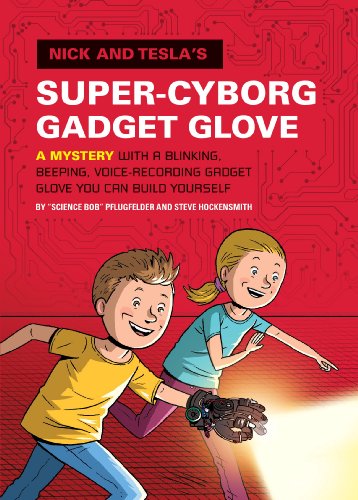 Nick and Tesla’s Super-Cyborg Gadget Glove: A Mystery with a Blinking, Beeping, Voice-Recording Gadget Glove You Can Build Yourself (4.5/5 stars, currently priced at $9.99)

Bright siblings—and amateur inventors—Nick and Tesla Holt are back in this fourth installment of their whiz-bang middle-grade series. This time, the twins are out to save science itself, as they race against the clock to figure out why a robotic assortment of history’s greatest scientists and inventors keeps going haywire.

Is this sabotage, robo-geddon…or something more sinister? To unravel the mystery, they’ll have to keep adding all-new gadgets to their cyborg glove as they stay one step ahead of a hidden adversary. Together with zany scientist Uncle Newt and their friends Silas and DeMarco, Nick and Tesla won’t give up until an answer is found…but can they do it before time runs out?

In this book, readers will learn how to construct a super-cyborg gadget glove that has four incredible functions: LED signal light, ultra-loud emergency alarm, handy sound recorder, and UV secret message revealer. Science and electronics have never been so much fun! 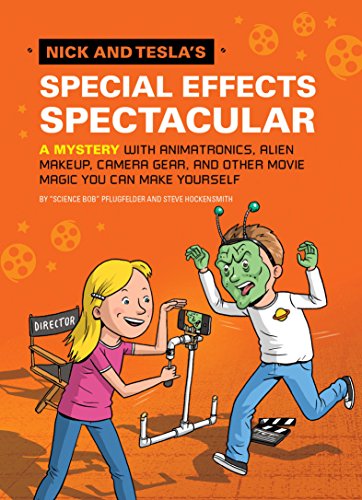 Nick and Tesla’s Special Effects Spectacular: A Mystery with Animatronics, Alien Makeup, Camera Gear, and Other Movie Magic You Can Make Yourself! (4.5/5 stars, currently priced at $9.99)

What do a pair of kid inventors with a knack for science and electronics do when Hollywood comes to town? Why save the day, of course!

In Nick and Tesla’s Special Effects Spectacular, 11-year-old siblings Nick and Tesla Holt find themselves on the set of a big-budget superhero movie. But someone’s sabotaging the onscreen debut of their favorite comic book hero, so the brother and sister sleuths must crack the case with the help of a fresh assortment of homemade special-effects gadgets. This cinematic saga features instructions for all-new movie magic projects that kids can build themselves, such as camera gear, stunt dummies, make-up magic, and more. Science and electronics have never been so much fun!

“How do you connect students interested in STEM (science, technology, engineering, mathematics) with fiction reading? Look for science adventures. Get started with the Nick and Tesla series. Each book contains an engaging adventure revolving around a ‘build-it-yourself’ science project.”—Teacher Librarian

“Real project blueprints are included along with this tale of 11-year-old siblings who create outrageous contraptions and top-secret gadgets.”—Los Angeles Times