Hot in the Saddle: The Men of the Circle R 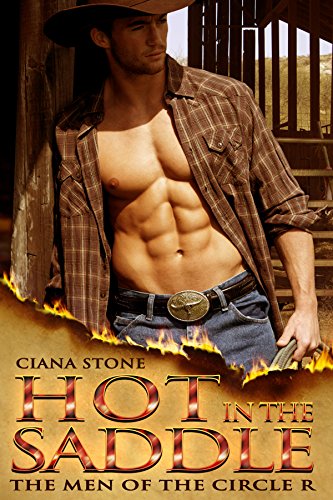 Four ranchers as hot as the Arizona desert – men more than willing for a night of loving, but who all think that love is not in their cards.

Join Chase Hawks and his half-brothers Clay, Cole and Caleb Russell as they discover that falling in love sometimes means accepting things you never thought possible.

Chase’n’Ana
Chase Hawks had a good handle on life. Between his small spread in Arizona, his success on the rodeo circuit and a bevy of beautiful women always available to satisfy his urges, he figured he had control over his life.

Then fate intervened. He ran over a woman. Literally. Hit her with his truck.

Ana Stillwater had no control over her life. She’d skipped out on an abusive husband with three hundred dollars, a car that was on its last leg and a hawk named Fergi. She figured life couldn’t get any worse.

Then it did. Her car breaks down in Arizona and if that isn’t enough, she gets hit by a truck.

Which brings up the question: Just what happens when a rational, down-to-earth rancher hooks up with a quirky new age witch who can give him a hard one with just a look and likes to dance naked under the moon?

Molding Clay:
Clay Russell had plans, Big plans. First he was going to win the Nationals in bull-riding, then he was going to start his own spread and breed horses. But his family had other plans. They roped him into leaving Arizona and taking on the job of getting a struggling ranch in North Carolina back on its feet.

Neither of them expected the passion that would explode between them, or the danger that would threaten their lives. They were both in for surprises.

Scout’n’Cole
Cole had no trouble attracting women. The Russell men were all blessed physically, and Cole was no exception. However, finding a woman who could match his passion for the wilderness as well as ignite passions of a different kind in his life was the problem.

Scout Windrider knew that love wasn’t for her. She’d yet to encounter a man who took her breath away, and figured it was just as well. What man would want to hook up with a woman who spent most of her life in the wild, tracking mountain lions?

Neither of them could have foreseen being paired in a no-kill hunt turned deadly would force them to confront an explosive attraction hot enough to consume them with its heat. Faced with a murderous madman intent on exacting revenge against the Windrider family, Scout and Cole take a leap of faith with each other, and discover something relegated to myth and legend prove to be true, that will touch their lives in a way that will change them forever.

Conn’n’Caleb
Single and loving it! That’s Caleb, the only Russell man not yet hitched, and that’s fine with him. Life’s good—if a little predictable. Until a little lady drops out of the sky and into his kayak, nearly drowning him in the process.

But getting wet is the least of his problems. Seems Caleb’s going to follow his brothers when it comes to fixing on kinda offbeat women, because Conn isn’t like any woman he’s ever known. But then he’s never met a woman who isn’t from this world. And he sure as shit hasn’t ever met one who can put as much starch in his shorts and fire in his blood as Conn can with just a look.

Caleb thought he was a master when it came to seduction and making love. What he’s about to learn is that he’s only touched the tip of the iceberg.