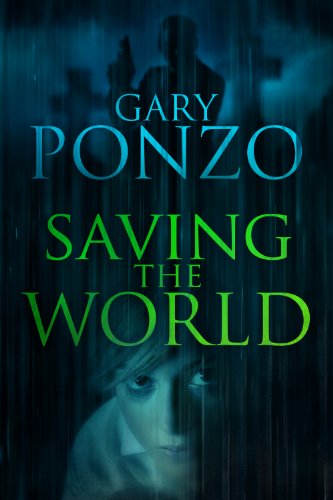 Award-Winning author, Gary Ponzo, brings us a mind-bending thriller about Margo Sutter, a proven teenage clairvoyant who hears invisible aliens planning to destroy the planet. The world is in a frenzy debating whether to prepare for the apocalypse or lock up Margo in an institution. When she seeks help from noted psychiatrist Michael Bryant, he’s drawn into a maze of deception, lies and intrigue.

Is Margo who she claims to be?

A priest friend of Bryant believes Margo is an angel come down to save our souls.

An FBI agent believes she’s aligned with the aliens and needs to be killed.

As Bryant and Margo flee from the agent’s team of killers, they search for the truth behind the voices and what it means for our future.

Who is Margo Sutter?

And will she survive long enough for the world to find out?

This heart-pounding drama starts on page one and doesn’t stop until the epic conclusion to this suspenseful new thriller.

5-Star Amazon Reviews
“Gary Ponzo has done it again. I could not put this book down. What a page turner!! I wanted to reach out and comfort these characters in their grief. Gary put this story together in such a heartwarming, yet scientific way. I will certainly recommend Saving the World to all my friends and will be giving this book as a gift to many of them this year.”
“Gary Ponzo proves his flexibility as a writer/storyteller in his new novel…”
About The Author

Author Gary Ponzo began his writing career over a decade ago by writing short stories. He quickly discovered a knack for the short form. In just five years he’d published seven short stories in various publications, two of which were nominated for the very prestigious Pushcart Prize.

His first novel, “A Touch of Deceit,” took five years to write and one to pick clean. The story was born from his childhood experiences working in his father’s candy store in Brooklyn, NY. His father was Sicilian and became friendly with some local members of a different kind of Sicilian family. Since Gary was just fifteen at the time, these family members would make sure he was protected whenever he would work late at night by himself. He soon discovered a side to the mafia not many people knew. It was these relationships which caused him to write about Sicilian FBI agent, Nick Bracco, who recruits his mafia cousin to chase down the world’s most feared terrorist.

“A Touch of Deceit,” went on to win the 2009 Southwest Writers Novel Contest, Thriller category. He is currently working on the 5th book in the Nick Bracco series as well as trying to create world peace in his spare time. Gary currently lives in Phoenix, Arizona with his wife Jennifer and two children, Jessica and Kyle.