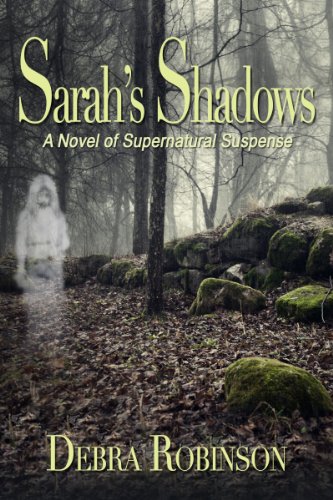 5.0 stars – 11 Reviews
Kindle Price: 99 cents
Text-to-Speech and Lending: Enabled
Don’t have a Kindle? Get yours here.
Here’s the set-up:
Sarah can’t believe she’s dead. But apparently she is, because no one can see
or hear her-at least not until her dead brother Jesse shows up! Jesse explains
the mission: to save their father, who’s stuck in this ominous Shadow Land
between life and death-a strange world full of monsters and
demons. But Jesse has broken the rules to meet Sarah here, and the demons
are sticklers for rules. Now they want their due-Jesse and Sarah.A twisted Wizard of Oz meets the afterlife, in a new kind of coming-of-age
tale. Here, the Dark side disguises itself as the Light, and a Fallen Angel
falls for Sarah. Supernatural Romantic Suspense at its finest, Sarah’s Shadows will be appreciated by fans of Stephen King, and those who like a little bit of “scary” in their romantic suspense!
One Reviewer Notes
“I sat down to start the book today and read it all in one sitting. It was awesome. There is an overall energetic, hurried, deadline feel that is constant the whole way through the book. I love how the story jumps right into the action, and never seems to let up.  Overall, it was a great story. Very emotional and powerful.” – Sarah, workadayreads.com
About The Author

Debra Robinson is an author, psychic and a professional musician. She was born into a religious, though psychic family.

Three years in a haunted house at a young age started Debra on her quest to understand the paranormal, leading to extensive studies in palmistry, tarot and her own clairvoyance. She lends her abilities to paranormal investigations, and has a large clientele for private readings.

Debra has thriving careers in both live performance and music publishing as well, and has 2 CDs available; Pretty Lies and Perfect Girl. Debra most recently had a song from her catalogue written and performed by her deceased son James, placed posthumously in the latest Matthew McConaughey redband film trailer (Killer Joe).

Debra’s first book is “A Haunted Life: The True Ghost Story of a Reluctant Psychic” Llewellyn Worldwide Publishing, released July 2013. She is currently writing a follow-up book for Llewellyn. She lives in Ohio, performing music regionally and writing in the off-season. Debra enjoys writing about true hauntings, as well as stories which feature the paranormal. Her latest work is a paranormal novel, “Sarah’s Shadows”, and is best described as a twisted Wizard of Oz meets the afterlife. Definitely for fans of Stephen King.