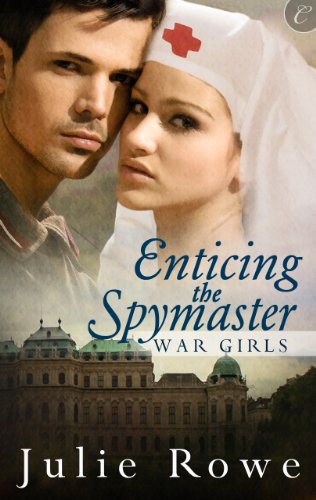 Kindle Price: $2.51
Text-to-Speech: Enabled
Don’t have a Kindle? Get yours here.
Or check out the Audible.com version of Enticing the Spymaster (War Girls)
in its Audible Audio Edition, Unabridged!
Here’s the set-up:

Judith Goddard is hiding in plain sight. A dual citizen with family ties to Belgian royalty and the British military, she works as a Red Cross nurse in a German hospital, learning what she can, ever fearful her true allegiance will be discovered.

British Expeditionary Force Captain Michael Lawrence is on a mission to rescue the daughter of his mentor. He doesn’t expect to find a strong beautiful woman in place of the naïve girl whose love he rejected years earlier.

Jude is shocked when Michael turns up in her hospital, wounded and in German uniform. Though he broke her heart, she agrees to flee Belgium with him—she has information about an imminent attack that she must deliver to the British War Office, before it’s too late.

Posing as a married couple, Jude and Michael journey to the border, in constant danger of discovery—and of giving in to their mutual passion…

For more stories of love and war, download Saving the Rifleman, available now!

Julie Rowe’s first career as a medical lab technologist in Canada took her to the North West Territories and northern Alberta, where she still resides. She loves to include medical details in her romance novels, but admits she’ll never be able to write about all her medical experiences because, “No one would believe them!” A double Golden Heart finalist 2006, Julie’s writing has appeared in several magazines such as Today’s Parent, Reader’s Digest (Canada), and Canadian Living. She currently facilitates communication workshops for her local city college. Julie enjoys hearing from her readers. You can reach her at www.julieroweauthor.com or on Twitter @julieroweauthor .