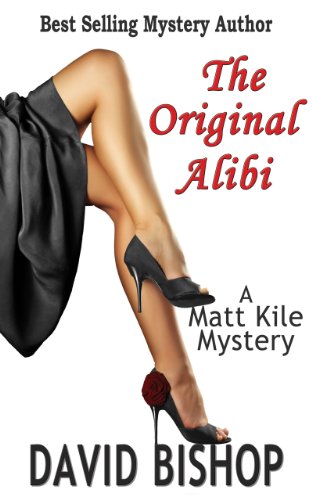 4.6 stars – 42 Reviews
Kindle Price: $4.99
Or currently FREE for Amazon Prime Members Via the Kindle Lending Library
Text-to-Speech and Lending: Enabled
Don’t have a Kindle? Get yours here.
Here’s the set-up:
* ON 3 DIFFERENT AMAZON BEST-SELLLING LISTS
* ON 3 DIFFERENT AMAZON TOP-RATED LISTSEleven years ago General Whittaker, long retired, former member of the Joint Chiefs of Staff, bought an alibi for his grandson who had been arrested for the murder of his fiancée, Ileana Corrigan, and the general’s unborn great grandson. The charges were soon dropped and the grandson released. General Whittaker is now dying and he can no longer restrain his doubts. The question that has haunted him all these years must be answered. Did his money save his innocent grandson or cheat justice?The general hires Matt Kile to thaw this cold case. The solution of the crime is complicated by the passage of years and an excess of suspects, including the general’s grandson, the general’s promiscuous adult daughter, and even the general himself. All had means, motive, and opportunity. The Original Alibi is a big story told on a small stage, intimately portrayed primarily among the members of the Whittaker family and those who serve them. Of the secrets and strategies that fester inside an outwardly functional and famous family.Matt Kile is a former homicide detective, and pardoned ex-con who, like several real-life former cops, has gone on to achieve success as a writer of mystery fiction. Matt’s efforts are aided by a colorful cast of Damon Runyonesque characters. Chief among them is Axel, Matt’s former cellmate whose parole, after more than thirty years in prison, had been advanced by Matt’s promise of a job. He is also helped by Hillie, a young inexperienced streetwalker Axel takes under his wing. Then there’s Bruno Grunsky, a former mob wheelman, and retired spinster Clara Birnbaum who makes pies in return for Axel’s favors. This mixed bag of characters add flavoring to the story, while each, in their own way, help Matt Kile determine the guilt or innocence of General Whittaker’s grandson.
One Reviewer Notes
“If you like your whiskey neat, your dames busty, your case cold and your investigator saddled with a shady past…you’ll throw back the latest installment of David Bishop’s Matt Kile mystery and find it goes down smooth and tasty. Colorful characters and layered plot make this a classic waiting to happen.” 5-Star Amazon Review