“An Everyman with a big heart and a wicked jab, Duffy Dombrowski may well be the new Spenser. I can’t wait for Round Two.” — Marcus Sakey, author of THE BLADE ITSELF, A New York Times Editor’s Pick 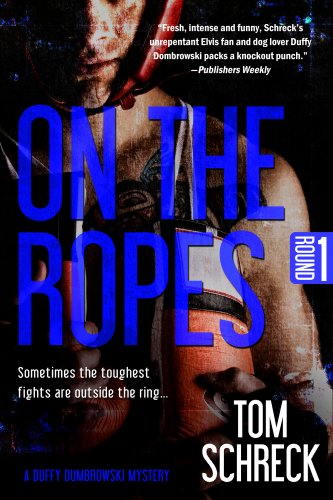 (A Duffy Dombrowski Mystery)
by Tom Schreck
4.6 stars – 39 Reviews
Kindle Price: 99 cents
Text-to-Speech and Lending: Enabled
Here’s the set-up:
A ghetto social worker, moonlighting as a heavyweight fighter, Duffy Dombrowski, knows the street, the ring and the meanness this world can throw in relentless combinations. He has his code, he’s got Elvis and now he’s got his own reason to live—to find the kidnapped daughter of the helpless murdered woman from his caseload.Sure, they’re from the ‘hood and no one’s supposed to care which is just why Duff has taken on this fight. Get in his corner and travel the seamy rode to crack addiction, modern day white slavery and the depravity of real life internet porn.

With Al the rescued basset hound riding shotgun, more than a few empties of Schlitz and the real life of a real man who just happens to care, On The Ropes, gets you off the stool, out of your corner and into a nasty street fight. There’s no doubt that this one’s going the distance.

“An Everyman with a big heart and a wicked jab, Duffy Dombrowski may well be the new Spenser. I can’t wait for Round Two.” — Marcus Sakey, author of THE BLADE ITSELF, A New York Times Editor’s Pick “It won’t take long to realize Duffy doesn’t run to type…occasionally over the top, but warmhearted, tough, funny Duffy makes a promising debut.” —Kirkus Reviews

“It’ll put you down for the count with laughter. Tom Schreck is a contender for funniest author working in the crime genre today.” –William Kent Krueger author of Thunder Bay

“This is one hell of a debut novel. ON THE ROPES is easily one of the best five books I’ve read this year.” –Jon Jordan, Crimespree Magazine

“If you like underdogs, colorful characters, a fighter who never quits and a canine with more bite and heart than Jake LaMotta– a unanimous winner.” — Teddy Atlas, ESPN Boxing Analyst