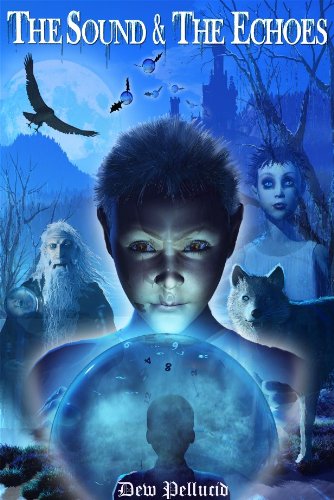 The Sound and the Echoes

by Dew Pellucid
4.7 stars – 9 Reviews
Kindle Price: $2.99
Text-to-Speech and Lending: Enabled
Don’t have a Kindle? Get yours here.

The Sound and the Echoes is a high-concept, fantasy adventure for middle grade and young adult readers, with 27 magical illustrations.

Imagine that everyone around you has a mirror image living somewhere else. Your world is like a sound, which produced that other world of echoes. And in this land men are governed by a terrible law—no Echo is allowed to live after his Sound dies.

One Sound especially must die. The Prince’s Sound. The Fate Sealers and Fortune Tellers will make sure of that! Because after this Sound dies, the Echo Prince will have to die too.

Now, twelve-year-old Will Cleary is about to discover that he is the Sound the Echoes are hunting. And so begins his perilous adventure into a see-through, sparkling world, filled with spying crystal balls, an eerie fortress of castaway children, a hunt for clues in an ancient book of riddles, and a last-chance escape through a frozen gem-studded lake into a secret land that holds the key to placing the Prince on the throne and returning freedom to the Echoes.

“The story shares a number of similarities with the Harry Potter series… but the unique, complex Echo world is enough to set this story apart… A fantasy novel that readers hungry for magic and adventure will gladly devour.”
-Kirkus Reviews

“The Sound and the Echoes is an extraordinary tale that will be loved by many children, teachers, and their parents alike… It is a must in any school or home library.”
-Author Anna del C. Dye.

“I believe my twelve year old self would have loved this book.”
-Lace and Lavender Hints Book Blog.

“If adventure is what you crave, The Sound and the Echoes delivers.”
-Anastacia Hawkins for Readers Favorite.

~ Check out DewPellucid.com for the author’s Facebook, Twitter, Blogger and other social networking links. ~One night I was lying in bed, thinking of the philosopher Plato (of all people). I wondered about his realm of the forms, a place where the true essence of things exists; for we are just reflections of this higher plain… or so Plato thought (which is forgivable, given that he was only a Sound).Very soon I was wondering about the implications of denigrating one world beneath another. And that’s how the idea of a reflection realm was born, one in which Echoes have to die when their Sounds die (as if they are inferior).As to the theme of the novel, there is a main theme and sub-theme. Why two? Because if the book succeeds, perhaps I’ll get to write a sequel one day. If so, the overall theme for the series will remain the same, but each sequel with have a unique sub-theme.This said, the theme of the novel–that every man has a right to his own life–is revealed by the tragic consequences of the Law of Death. The sub-theme–that we are all equal regardless of the transparency or color of our skin–is expressed in the dislike Echoes feel towards Sounds and, most especially, Mongrels (mixed blood of both races).

Despite its dark themes, The Sound and the Echoes is set in a glittering, winter wonderland, filled with humor and see-through beings, courage, friendship and loyalty to values.

I hope you decide to visit!

A successful first novel made Grady Tripp a young star, and years later he still hasn’t grown up despite his professorship, estranged wife, and pregnant girlfriend. This satire of the permanent adolescence of the creative class is mordant, humane, and features characters as loveably flawed as any in American fiction.