The Daily Show Presents America (The Audiobook): A Citizen’s Guide to Democracy Inaction (avg review rating 4.5/5 stars, currently priced at 1 Audible listener credit or $13.95) is a laugh-out-loud, irreverent look at American history and governance, performed by the cast of The Daily Show. From Amazon:

Jon Stewart, host of the Emmy and Peabody Award-winning “The Daily Show”, and his coterie of patriots deliver a hilarious look at American government . . . Termed a “political king-maker” by Newsweek, and “the Dan Rather of infotainment” by Vanity Fair, Jon Stewart, along with the writers of “The Daily Show”, combines his riotous wit and razor-sharp insight in this hilarious book. American-style democracy is the world’s most beloved form of government, which explains why so many other nations are eager for us to impose it on them. But what is American democracy? In America (The Book), Jon Stewart and “The Daily Show” writing staff offer their insights into our unique system of government, dissecting its institutions, explaining its history and processes, and exploring the reasons why concepts like “One man, one vote,” “Government by the people,” and “Every vote counts” have become such popular urban myths.

This book was a bestseller, both in hard copy and audiobook form. The Daily Show followed it up with another bestseller that went on to win a Grammy: 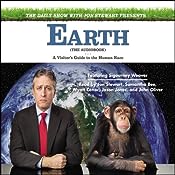 The Daily Show with Jon Stewart Presents Earth (The Audiobook): A Visitor’s Guide to the Human Race (avg review rating 4/5 stars, currently priced at 1 Audible listener credit or $14.89). From Amazon:

Where do we come from? Who created us? Why are we here? These questions have puzzled us since the dawn of time, but when it became apparent to Jon Stewart and the writers of The Daily Show that the world was about to end, they embarked on a massive mission to write a book that summed up the human race: What we looked like; what we accomplished; our achievements in society, government, religion, science and culture — all in a lavishly produced audiobook of approximately 200 minutes.
After two weeks of hard work and nights in the recording studio, they had their audiobook. EARTH (The Book) is the definitive guide to our species. With their trademark wit, irreverence, and intelligence, Stewart and his team will posthumously answer all of life’s most hard-hitting questions, completely unburdened by objectivity, journalistic integrity, or even accuracy.

For those who are not yet using Audible, here’s a special offer for new members:

This offer will start you on a free, 30-day trial of an Audible Gold membership plan, which gives you one credit per 30 days—the great majority of Audible audiobooks, even current bestsellers, only “cost” one member credit. If you decide to remain a member at the end of the 30 day trial period, you’ll be billed $7.95 per month for the first three months, then your monthly fee will adjust to $14.95. At the end of those three months, or at any time after the initial, 30-day trial, you can upgrade to a Platinum membership, which gives you 2 member credits each month for $23 per month (that’s just $11.50 per book).