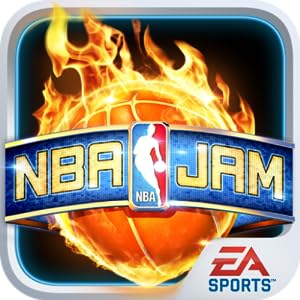 EA Sports’ excellent NBA JAM is here for Kindle Fire at last, and it’s fun for all ages!

Featuring photos of the actual faces of your NBA heroes on digital player bodies, NBA JAM is rated an average of 4/5 stars across 138 customer reviews, and allows you to play head-to-head against friends who also have the Android or Fire app!

This premium app is priced at $4.99, and reviewer after reviewer has said, “It’s worth it!”

BOOMSHAKALAKA!!!! Jam with your favorite stars from all 30 NBA teams in over-the-top, high-flying, 2-on-2 arcade basketball just like you remember it – and like you’ve never seen before!

3 modes of play let you ball the way you want: Play Now – Select a team and jump right into the ballgame. Classic Campaign – Defeat all other teams to win the championship, and unlock legends, hidden players, and outrageous cheats. Local Multiplayer – Go big head 2 big head against a friend via local WiFi or Bluetooth. 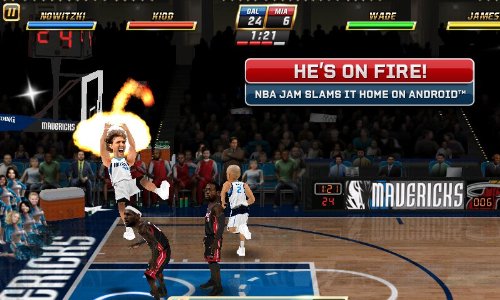 YOU’RE ON FIRE – ON ANDROID! If you’re from the Old School, you’ll feel the ‘90s nostalgia while you play the hottest arcade sports game on the Kindle Fire. Featuring the voice of Tim Kitzrow (the original NBA JAM play-by-play announcer), you’ll hear all the classic catchphrases plus a few new ones. This JAM is all about “boomshakalaka” – and beyond!

Go to the hole. Go strong. Go for the monster jam. KABOOM!

Awesome! This has to be the best game I have played on the Fire yet. Graphics are awesome and the controls are surprisingly accurate. Great job on this one EA…. brings back memories of playing all night. The facial expressions on the players is hilarious.