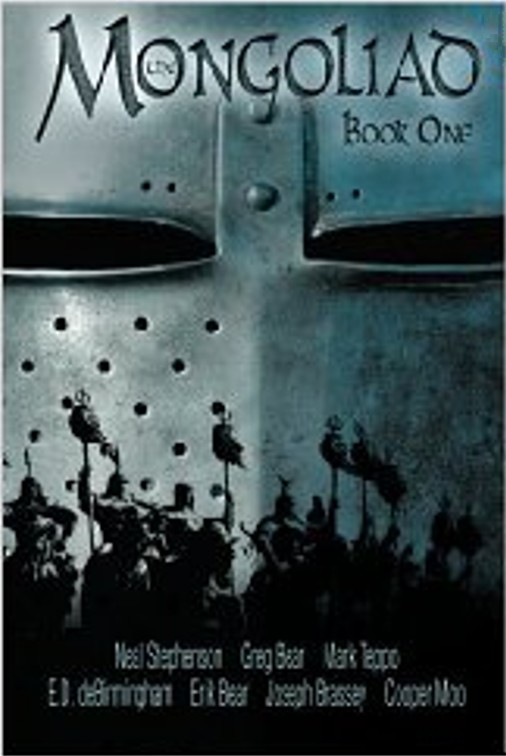 When you see that there are seven authors listed on the cover of this book, you might think The Mongoliad: Book One is a series of short stories. It’s actually the published version of what began as a dynamic, online collaboration between author Neal Stephenson and numerous other writers, artists, computer programmers and other tech and creative pros. From Wikipedia:

The Mongoliad is an experimental fiction project of the Subutai Corporation, initially released in September 2010. The corporation is an application company based in San Francisco and Seattle, whose chairman is speculative fiction author Neal Stephenson. Stephenson is the guiding force of the project, in which he is joined by colleagues including Greg Bear.

The work is intended to be distributed primarily as a series of applications (“apps”) for smartphones, which the Corporation views as a new model for publishing storytelling. At the project’s core is a narrative of adventure fiction following the exploits of a small group of fighters and mystics in medieval Europe around the time of the Mongol conquests. As well as speculative fiction authors Neal Stephenson, Greg Bear, Nicole Galland, Mark Teppo and others, collaborators include filmmakers, computer programmers, graphic artists, martial artists and combat choreographers, video game designers, and a professional editor. In a departure from conventional fiction, much of the content of The Mongoliad will be in forms other than text, not bound to any single medium and not in the service of the central narrative. Once the project develops momentum, the Corporation envisions fans of the work contributing, expanding and enriching the narrative and the fictional universe in which it takes place.

In the telling of the Corporation’s president Jeremy Bornstein, the genesis of the project was in Stephenson’s dissatisfaction with the authenticity of the medieval sword fighting scenes he had written into his Baroque cycle of novels. Stephenson gathered a group of martial arts enthusiasts interested in studying historical European swordfighting, and this eventually resulted in some of the members of this group collaborating on a set of stories which would make use of accurate representations of these martial arts. The collaborators decided the project need not limit itself to traditional novel form, and began developing ideas on how to produce it in different media while retaining the caliber that would be expected of a new work by authors such as Stephenson or Bear.

The project has been active online since 2010, and this book is the first volume in the published series that’s continuing to be written as you read this post. While there are no reviews posted to Amazon thus far, on Goodreads the book has an average reviewer rating of 4/5 stars across 389 reviews. So what’s the book about? From Amazon:

The first novel to be released in The Foreworld Saga, The Mongoliad: Book One, is an epic-within-an-epic, taking place in 13th century. In it, a small band of warriors and mystics raise their swords to save Europe from a bloodthirsty Mongol invasion. Inspired by their leader (an elder of an order of warrior monks), they embark on a perilous journey and uncover the history of hidden knowledge and conflict among powerful secret societies that had been shaping world events for millennia.

But the saga reaches the modern world via a circuitous route. In the late 19th century, Sir Richard F. Burton, an expert on exotic languages and historical swordsmanship, is approached by a mysterious group of English martial arts aficionados about translating a collection of long-lost manuscripts. Burton dies before his work is finished, and his efforts were thought lost until recently rediscovered by a team of amateur archaeologists in the ruins of a mansion in Trieste, Italy. From this collection of arcana, the incredible tale of The Mongoliadwas recreated.

Full of high adventure, unforgettable characters, and unflinching battle scenes, The Mongoliad ignites a dangerous quest where willpower and blades are tested and the scope of world-building is redefined.