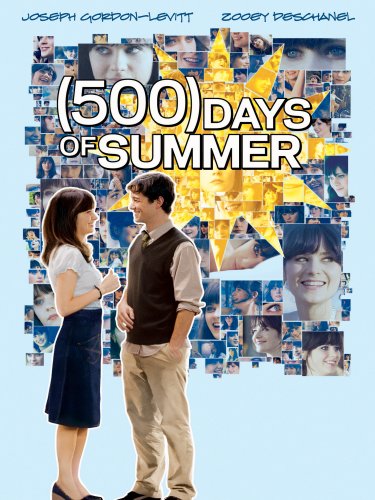 In general, I am not a fan of the Romantic Comedy genre of films. Taken as a group, I find them to be too predictable, too pat, and filled with too many cliches and coincidences to be remotely believable or relatable. But every now and then, an exceptional gem comes along to buck the trend and keep me from giving up on the genre altogether.

Perhaps the best recent example is the wonderful (500) Days of Summer. Starring Josepth Gordon-Levitt (50/50, 3rd Rock From the Sun) and Zooey Deschanel (New Girl, Elf, She and Him), this is a contemporary tale of the awkward and very realistic arc of a relationship. The film is very well encapsulated by D. Small’s Amazon review:

The film’s opening makes it clear: This is not a love story. It is a story about love. Told in a non chronological fashion, we see 500 days in the relationship of Tom (Joseph Gordon- Levitt) and Summer (Zooey Deschanel). For those who have seen 10 Things I Hate About You, this is an evolution of that story told in a more realistic fashion. While Joseph Gordon-Levitt pretty much plays the same character, he adds gravitas to the ups and downs of relationships which all men go through at some point. Zooey Deschanel brings her playful carefree attitude to Summer, which the movie itself is quick to point out has a very strong effect over men. While most people expect this to be a love story, it’s not. It’s a carefully crafted story about relationships and the highs and lows we all experience and how we focus on the highs more than the lows. 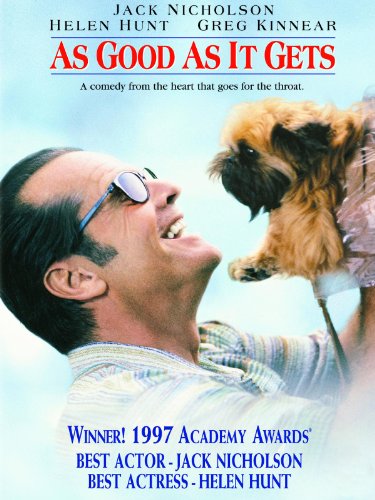 The Academy Award -winning As Good As It Gets may be the best known anti- Romantic Comedy, as it was a major studio release starring two big names: Jack Nicholson (A Few Good Men, The Witches of Eastwick, One Flew Over the Cuckoo’s Nest) and Helen Hunt (Mad About You, Twister, Cast Away). Susan Fong’s Amazon review tells you all you need to know:

“As Good As It Gets” is a rarity among today’s movies, a truly witty and poignant romantic comedy with an unusual protagonist. That protagonist is Melvin, played with relish by Jack Nicholson. Melvin is a highly successful novelist who is also an abrasive misanthrope suffering from severe obsessive-compulsive disorder. (Not your typical hero for sure!)
As one would expect, Melvin is a recluse and resistant to any changes in his life until he is forced to interact with a down-on-his-luck gay neighbor, Simon, portrayed by Greg Kinnear, and Simon’s perky little pet pooch, Verdell. Melvin also becomes reluctantly involved with the pretty and patient waitress Carol, played by Helen Hunt, who serves him breakfast every day at a local cafe. Other than Carol, none of the other cafe’s employees will deal with the impossible Melvin.
When Carol abruptly quits her job, Melvin tracks her down and offers her financial incentives to return to her post. Melvin increasingly finds himself drawn into Carol’s personal life, and he eventually falls for the plucky single mom…
Too many of today’s so-called comedies are mindless, uninspired concoctions profuse with sophomoric vulgarities and sexual obscenities. “As Good As It Gets” reminds us that there are still a few determined filmmakers willing to bring qualities such as intelligence, inventiveness, sophistication, and charm back to the silver screen. It is a shame that there are not more artists like these to inspire and entertain much-deprived audiences. 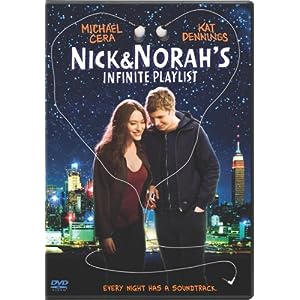 Finally, for something skewed toward a younger, hipper crowd, try Nick and Norah’s Infinite Playlist. This film stars Michael Cera (Scott Pilgrim vs. The World, Year One, Superbad) and Kat Dennings (Two Broke Girls, The House Bunny, Daydream Nation) as a couple of twentysomething indie music fans whose paths cross in New York City as they both try to locate a secret, underground concert. From Amazon:

In the big-screen version of Rachel Cohn and David Levithan’s popular young adult novel, two high-school seniors fall in love over the course of one eventful evening. A straight bass player in a queercore band, Nick (Juno‘s Michael Cera) has just been dumped by the two-timing Tris (Alexis Dziena). He’s committed to making more self-pitying mix CDs until his bandmates convince him to help track down a top-secret rock concert. Meanwhile, Norah (Charlie Bartlett‘s Kat Dennings) and her hard-partying pal, Caroline (Ari Graynor), set off on the same journey. Nora had never met Nick, but she already had a crush on him (While attending the same school as Tris, she’s been enjoying the mixes Nick keeps making–and Tris keeps throwing away).

When the inebriated Caroline goes missing, [Norah and Nick] spend the rest of the night racing around the Lower East Side in his Yugo looking for the friend, the show, and trying to avoid Tris…Norah’s ex-boyfriend, Tal (Tropic Thunder‘s Jay Baruchel), presents further complications.

Peter Sollett’s follow-up to Raising Victor Vargas aims to please several audiences at once. It starts out like a less dirty-minded Superbad, morphs into a post-millennial After Hours, and ends as a Big Apple take on Before Sunset. It’s sweet and funny… –Kathleen C. Fennessy

Fans of the novel on which it’s based (available in a Kindle edition), indie music, New York and quirky comedies will definitely enjoy Nick and Norah’s Infinite Playlist, currently available as an Instant Video to rent for $3.99 or buy for $9.99.