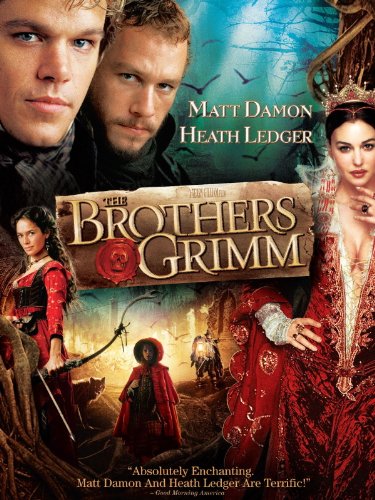 The Snow White remake Mirror, Mirror is in theaters this weekend, and coming fast on its heels is a more serious take on the same story, Snow White and the Huntsman. Writers, musicians, filmmakers and artists have long taken inspiration from the fairy tales of old, so it’s not surprising to find they’re still sparking imaginations all these centuries later.

Terry Gilliam’s darkly comic and very imaginative The Brothers Grimm stars Matt Damon and Heath Ledger in the title roles, as a pair of con men brothers who make their living exorcising various “supernatural” creatures (which are actually just their own cohorts, assisted with costumes, makeup, and medieval-era special effects). When they find themselves charged with solving the real mystery of girls who are disappearing from a small village, they must call on all their skills and overcome their fears to delve into magical matters they never believed were real. References to numerous well-known fairy tales are woven throughout the movie. This film carries a rating of PG-13, but it does have some fairly scary scenes so it’s not appropriate for young children, or those prone to nightmares.

Fans of the fairy tale update genre will also want to check out the TV series, Grimm, a crime drama based on the premise that fairy tale monsters are real, and hiding in plain sight among us. From Amazon:

Detective Nick Burkhardt (David Giuntoli) is a Portland, Oregon homicide detective with a strange secret: he’s a descendant of an elite group of hunters who are charged with stopping the proliferation of supernatural creatures in the world. The Brothers Grimm wrote fairy tales that children have adored for generations, but imagine if their villains were real, and Nick was the only one who could stop them.

The show is similar in tone and content to fan favorites Buffy the Vampire Slayer and Supernatural, in that it glides fairly effortlessly between scares, action and humor, and the hero must hide his true nature and what he knows about the world from almost everyone around him. 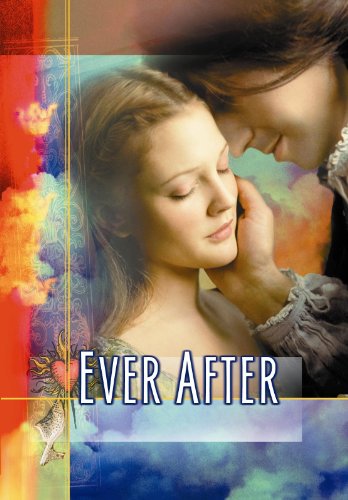 Ever After is a family-friendly, girl-power take on the Cinderella story. Drew Barrymore stars as Danielle, the kind and hardworking orphan who’s ill-treated by her stepmother and stepsisters. But in this version, Danielle is also smart, well-read and self-assured, taking the Prince to task for his snobbery and blindness to the plight of the poor.

This version of the story also casts one of the sisters, Jacqueline (played by Melanie Lynskey, whom you may have seen in Two and a Half Men and the wonderful drama Heavenly Creatures, which co-stars Kate Winslet in a career-launching turn) as a kinder, gentler sort of stepsibling who’s in league with Danielle to defeat her cruel mother and sister by the third act.

If you’re intending to see both of the new Snow White films, you might be interested in Snow White, A Tale of Terror, which stars Sigourney Weaver and Sam Neill, and treats the story as a supernatural thriller with overtones of horror. This film is rated R. From Amazon:

If you thought Snow White was only a fairy tale, you’re about to discover the truth, but lock up your children first. The real tale of Snow White, starring Sigourney Waver and Sam Neill, is a tale of relentless terror and unimaginable horror. When young Lillian’s mother dies during childbirth, the father soon re-marries the well-intentioned Lady Claudia. However, Claudia’s heart is ruled not by her husband, but by an evil mirror with the power to make Claudia Queen over all living things… until they are dead.

Although the BASIC story structure remains, SNOW WHITE: A TALE OF TERROR is an interpretation that is much closer in tone and mood to the original somber tale by the Brothers Grimm, and in many ways it is actually even darker. Instead of a kiddie flick, then, what director Michael Cohn and crew serve up is a top-notch gothic horror film.

And of course, there’s always the Disney animated classic Snow White (available in hard copy formats only), which has been delighting children and adults alike for decades.