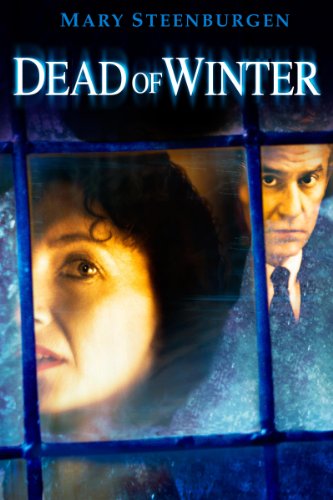 The Woman in Black: people seem to either love it or hate it, depending on their tastes in thrillers and horror. It’s an atmospheric, methodically-paced, old fashioned ghost story: heavy on foreboding and dread, light on graphic violence. While this kind of horror film seems unique in today’s world of such fare as Saw and Human Centipede, it wasn’t so very long ago that filmmakers like Hitchcock put the characters and plot onscreen but left the killings and gore up to the viewer’s imagination.

If you miss the “kinder, gentler” thrillers of yesteryear, Dead of Winter is your kind of film. Starring Mary Steenburgen and Roddy McDowall, this 1987 release shows Hitchcockian influences in its claustrophobic settings, twisty plot and characters who are not what they seem. From Rotten Tomatoes (where the film earned a 75% “fresh” rating from critics):

Despite its relative failure at the box office, this is a worthwhile thriller from the director of Bonnie and Clyde. Mary Steenburgen stars as an actress, Katie McGovern, lured to the upstate New York cabin of crazy Dr. Joseph Lewis (Jan Rubes), a diabolical crippled shrink playing a blackmail game with the ruthless sister of a recently murdered woman…Lewis and his creepy assistant (Roddy McDowall) keep Katie captive…to further their sordid plot…As the title implies, Arthur Penn gets a lot of atmosphere out of the remote cabin and a raging blizzard, and the cast is terrific.

Scott Weinberg of eFilmCritic.com says, “A seriously underrated little mystery flick. Give it a shot!”

Give it a shot, indeed. But preferably not alone, and with at least a few lights left on! Dead of Winter is currently available to rent as an Amazon Instant Video for $2.99, and has an average Amazon customer rating of 4/5 stars across 27 reviews.