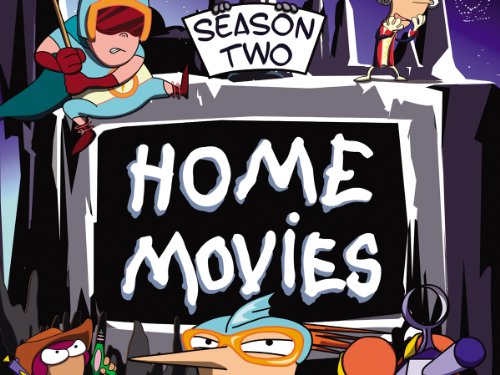 If you’re a fan of H. Jon Benjamin (voice of Sterling Archer on Archer and Bob on Bob’s Burgers), of smart, quirky animation, of movies or of comedy in general, Home Movies is not to be missed.

Animation That’s Not For Little Kids

This clever and hilarious animated show ran for four seasons on the Adult Swim block on Cartoon Network (it carries a TV-14 rating when episodes air on television, it’s not intended for young children), and follows the adventures of Brendon Small (voiced by the show’s co-creator, key music talent and voice actor of the same name) and his friends Jason and Melissa. Brendon and his friends are third graders with the wit and sophistication of twentysomethings when it comes to film and pop culture references, and the trio seem to divide their time about equally between soccer practice, pursuing typical third-grader interests and activities, and making the movies Brendon writes and directs.

H. Jon Benjamin voices the hard-drinking, chronically lonely and cash-strapped Coach McGuirk, who actually knows very little about soccer and often receives much better guidance from the kids he coaches than he could ever give to them (on any subject). Add Brendon’s wannabe-author, underemployed, divorcee mother (voiced by Paula Poundstone for four episodes in the first season), the hyper and creepily close duo of best friends Walter and Perry, straightlaced, excessively cat-fancying teacher Mr. Lynch, and Brendon’s father’s prickly new love, and you’ve got a show that goes in clever and unexpected directions at every turn.

Film buffs will find plenty of film industry references and in-jokes in pretty much every episode, because Brendon is working on at least one film project in every episode and every one of his projects is influenced to some degree by popular movies he’s seen or directors he admires. For example, one episode circles around his film project, Movie History, which is so entitled just so he would always be able to tell reporters and interviewers that he’s making “movie history”. His mannerisms and style of costume in the mockumentary of Movie History (which he is also writing and directing) are quite Spielberg-ian.

Keep an ear out for voice cameos from such comedy greats as Patton Oswalt, Louis C.K., Emo Phillips, Maria Bamford and the late Mitch Hedberg. Home Movies’ ability to attract such top-notch comedy talent speaks to its quality as a program.

Currently, every episode of all four seasons of Home Movies is included in the Prime Instant Video Library, so if you’re a Prime member, you can enjoy this excellent program free of charge on your Kindle Fire. For non-Prime members, currently, individual episode downloads can be purchased for $1.99 each and downloads of entire seasons can be purchased for $20.99 each. 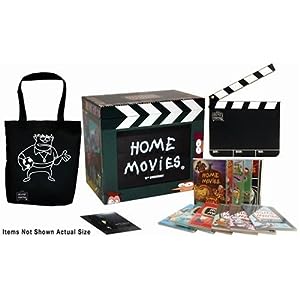 If you find you really enjoy this show, you might consider investing in the wonderful, limited edition, 10th anniversary boxed set, which includes every episode of the show on 12 DVDs containing numerous extras and commentaries, a separate CD containing all the music from every episode (mostly written and performed by the multi-talented Brendon Small, who has since moved on to the animated Metalocalypse), a souvenir clapboard and a canvas totebag imprinted with the image of Coach McGuirk.

When watching the first season of the show you may think there’s something wrong with the video, or your Kindle Fire, but don’t worry: the first season of Home Movies was animated in “Squigglevision”, where the lines of the animated drawings look uneven and seem to vibrate slightly onscreen. This is the animation style used in another popular animated show, Dr. Katz: Professional Therapist (available on DVD). The effect is subtle and doesn’t detract from the content of the show, and was abandoned for seasons 2-4.