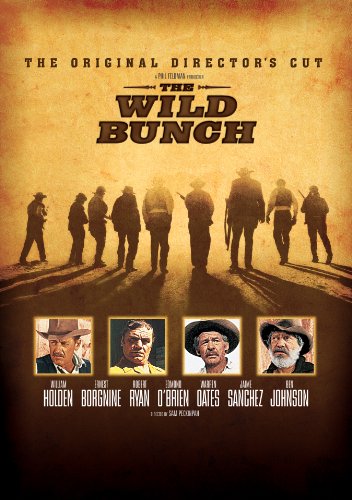 Sam Peckinpah’s The Wild Bunch is a classic not only among Westerns, but of American cinema in general. Since the 1969 film is now available as an Amazon Instant Streaming video, you can watch it right on your Kindle Fire. Better still, it’s part of the Prime Video Library: if you’re a Prime member, you can watch it for free! Otherwise, you can rent it for 48 hours for $2.99, or buy a digital download for $9.99.

This brutal, epic film was nominated for two Academy Awards, and stars William Holden and Ernest Borgnine.  Its plot may seem pretty simple and familiar, but what makes this film noteworthy is Peckinpah’s innovative direction and its exploration of themes that run much deeper than a mere tale of outlaws on the run.  From IMDB:

In the Wild Bunch the movie opens with a group of aging outlaws’ final score, a bank robbery. The event concludes with a violent and overtly bloody shootout that would generally mark the finale of a movie. This is correct in that it marks the finale of an era, for the characters and the world they live in. They simply can no longer keep up, the times are changing, technology advancing, and their style of life is getting left behind in the dust that they spent so long galloping through. They [try to] abandon their careers for the simpler life of retirement. They enjoy this time, they live their fantasies. During this time the law is always on their tracks, bounty hunters. The further into their fantasy they get, the closer their demise seems to get. When one of their own is captured they are faced with the choice of escape or what is certainly a suicide mission to attempt to free their comrade…

At a time when the gentleman-frontierman was a staple of the Western and the bad guys were designated as much by their black hats and mild cursing as by anything they actually did, The Wild Bunch came as a real shock to the sensibilities of audiences and critics alike. It was released at a time when the Cinema Verite (or “truthful cinema”) movement was gaining in popularity. Cinema Verite was a reaction to the sanitized, heavily censored films of the mainstream movie industry, and it aimed to make films a more realistic, gritty reflection of life.

From Butch Cassidy and the Sundance Kid (also free to Prime members, same prices as The Wild Bunch for others) to the teen heartthrob-driven Young Guns, virtually every Western made after The Wild Bunch bears the marks of its influence. Crime thrillers as disparate as Pulp Fiction and Scarface, not to mention the military masterpiece Apocalypse Now, also follow in the graphically violent, yet pithy footsteps of what many consider to be Peckinpah’s master work, in which themes of loss, fraternity and what it means to be an honorable man are explored in unflinching terms.

Whether you’re a fan of Westerns or just an all-around film buff, The Wild Bunch is not to be missed.