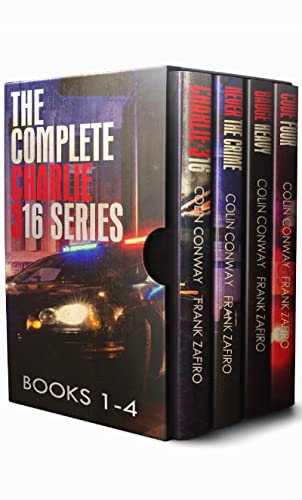 – Learn More
Enjoy Colin Conway, Frank Zafiro Books? Tell us why and WIN a chance for a FREE ebook!
Here’s the set-up:

Tyler Garrett was the model police officer until an ambush unraveled his world.

The Charlie-316 series is ripped from today’s headlines and examines a modern police department’s response to corruption within its ranks. When assailants attack Spokane Police Officer Tyler Garrett, he faces a decision most can never comprehend. After the shooting stops, the questions begin.

Garrett soon confronts the doubts of a mistrustful public. Remaining silent protects his rights but makes him look guilty to a clamoring media.

When investigators uncover a conspiracy, will Garrett’s safety be ensured? Or will the city offer up a favorite son for the sins of their police department?

No matter the outcome, a city and its police will never be the same again.

The boxed set collects the entire four-book arc of the Tyler Garrett saga. Follow every moment from that fateful traffic stop to the resolution no one will expect.

If you like hard-hitting police procedurals mixed with political intrigue, then grab the Charlie-316 series today.