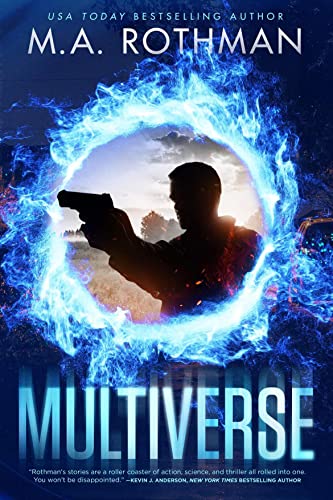 By a USA Today bestselling author: Michael, a professor of particle physics, has discovered a way to pierce the veil of time and space, but in so doing, he’s unwittingly opened Pandora’s box. Is it possible to undo what a future version of yourself has done, or is the world doomed to the chaos that’s been loosed on the world?

When Michael Salomon woke up Tuesday morning, he did so with a smile, knowing that today would be a positive turning point in his career. With his first child on the way, he couldn’t shake the feeling that something bad was about to happen. As he drives into work, he feels a sudden wave of anguish wash over him, and he sees himself alone, at the gravesite of an unborn daughter. It feels like a crystal-clear memory, a waking nightmare that nearly sends him crashing into the car in front of him.

The idea of faster-than-light particles has been a part of science fiction lore for fifty years, yet Michael had made a breakthrough discovery late last night. Tachyons do exist.

Going back into the office, he hasn’t even had a chance to tell anyone about what he’s discovered when the men from DARPA came calling. The entirety of his research has suddenly become an object of national security.

But it was only when a young college student intercepts him as he gets into his car that he knows the life he’s looking forward to is over.

The student has memories of her future self… a future where she’s worked with Michael on extending his research. She knows things that he’s only thought of as possibilities, and she speaks of them as if they’d already happened. And most chilling of all, she speaks of a future where they are both in hiding from the government that sees them as the enemy.

MULTIVERSE is a story about a scientist who uncovers a way to pierce the veil of time and space, and has unwittingly opened Pandora’s box.

Is it even possible to undo what a future version of yourself has done, or is everyone doomed to the chaos that’s been loosed on the world?