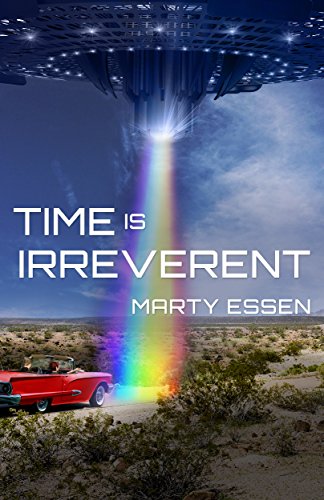 – Learn More
Text-to-Speech and Lending: Enabled
Available on Audible
Enjoy Marty Essen Books? Tell us why and WIN a chance for a FREE ebook!
Here’s the set-up:

AN IRREVERENT, LIBERAL, TWISTY, TIME TRAVEL COMEDY!What if you could make a change to history that would eliminate the Spanish Inquisition, American slavery, World War II, global warming, and an egomaniacal US president who thought he was smart enough to drop nuclear bombs here and there without negative consequences? What if that change also made the United States and 5 billion people poof from existence? Would you do it?

When alien time travel specialists, the Krichards, learn of President Handley’s game of dodge the mushroom cloud, they race to Earth to investigate. For them, the question of whether it’s worth it to change history is easy to answer, but they will only proceed if the human they deem best qualified to represent Earth agrees to make the change. Erasing Handley’s nuclear annihilation will require a quick jump to AD 31 to correct an error in history. If the Krichards select a brilliant scientist or an elite athlete for the task, Earth may be in good hands. Instead they select Marty Mann, a mildly successful travel writer whose only superpower is not taking life too seriously. What could possibly go wrong?

Spanning from the Cretaceous period to 2056, Time Is Irreverent is a hilarious, thought-provoking satire, with unpredictable twists, colorful aliens, huge dinosaurs, a smokin’ hot lesbian from the future, and a cameo from Jesus Christ himself!

Publisher’s Warning: This book is intended for a liberal audience and features satirical content that may not be appropriate for Donald Trump supporters or those who are offended by views that challenge traditional religious beliefs. Common side effects include wide smiles, sudden laughter, and occasional snorts. Reader discretion is advised.