The Nosferatu Conspiracy: Book One, The Sleepwalker 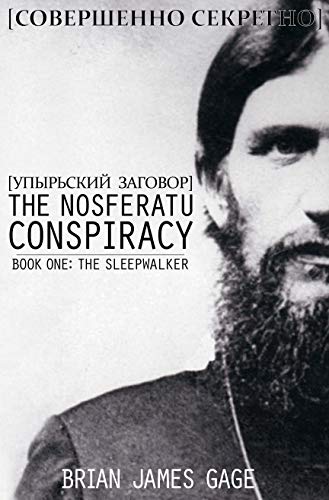 4.2 stars – 265 reviews
Kindle Price: $4.99
Text-to-Speech and Lending: Enabled
Here’s the set-up:
A sprawling Gothic supernatural thriller set in Saint Petersburg, Russia, against the backdrop of the Fall of the Romanov Dynasty. Evoking elements of Jack the Ripper and Vlad Dracula, the first book in the Nosferatu Conspiracy series is an action-packed and suspense-filled alternative retelling of Rasputin’s diabolical influence over the final days of the Romanov Dynasty.
================================================
History states Tsar Nicholas II, his wife Alexandra, and their five children were executed on the morning of July 17, 1918 (OS). This contrasts suppressed documents citing the royal family mysteriously disappeared after fires ravaged Saint Petersburg in December 1916 (OS).Grigori Yefimovich Rasputin was supposedly murdered by high-ranking Russian officials on December 16, 1916 (OS), for his unprecedented and perceived nefarious influence over the royal family. He was poisoned, shot twice, and clubbed into submission, yet remained alive. His attackers finally drowned him underneath the icy Neva River.Rasputin’s autopsy was reportedly performed three days later by Professor Kossorotov, a high-ranking Okhrana agent and future Kremlin operative. Cause of death: drowning. The document states Rasputin broke free of his bindings and his fingernails showed signs he’d tried to claw through the ice.

The stories surrounding Rasputin’s death are gross falsifications. His body was never recovered for examination, and his status within the Russian intelligence community to this day remains: At Large.

This is the true story of Rasputin’s paranormal coup d’etat and his conjuring of ancient vampires that destroyed Saint Petersburg, Russia, in December 1916.

History is a lie. The truth will be exposed.