I, Richard Plantagenet, An Epic Novel of Richard III 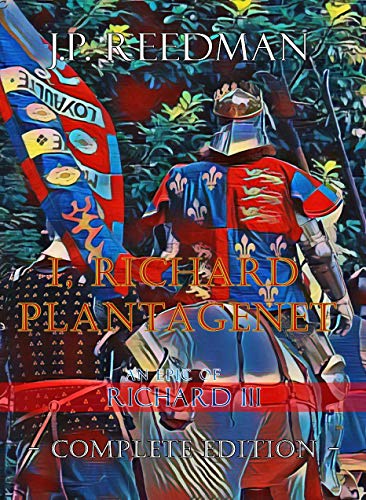 – Learn More
Text-to-Speech and Lending: Enabled
See more titles by J.P. Reedman
Here’s the set-up:
I, Richard Plantagenet, An Epic Novel of Richard III
Complete Edition, updated and revised, containing parts 1 and 2, Tante Le Desiree and Loyaulte Me Lie.
Richard III’s story, told in first person from his point of view, using, where possible, Richard’s actual words (in modern English.)
From the battle of Barnet when Richard is only 18 through his marriage to Anne Neville, to unexpected kingship, betrayal by his ‘friend’ Buckingham…and the mystery of the vanished princes. Then it is on through the pain of the loss of his only legitimate son Edward, to the final deadly conflict on Bosworth Field against Henry Tudor.
A different fictional look at England’s most loved–and most hated–King.. Not a wooden saint, nor yet Shakespeare’s hunchbacked fiend, a flesh and blood, fallible man: King’s brother, royal duke, scoliosis sufferer, warrior, husband, father.
Called ‘a new Ricardian classic.’
Approximately 250,000 words.
Contains what is probably the most up to date fictional account of Richard’s last moments at Bosworth, based on the archaeology and forensics.