A Riddle in Bronze (Mysteries in Metal Book 1) 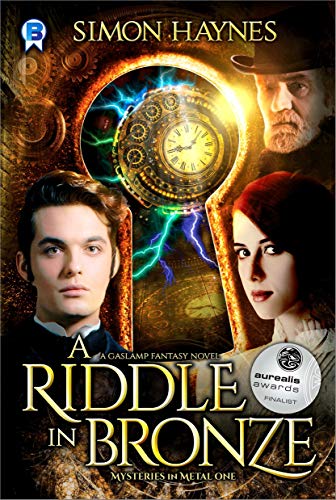 – Learn More
Text-to-Speech and Lending: Enabled
Enjoy Simon Haynes Books? Tell us why and WIN a chance for a FREE ebook!
Here’s the set-up:

An unlikely trio of ghost hunters ply their trade in Victorian England. But have they met their match?

London, 1871. When I applied for the position of bookkeeper with Professor Twickham and his daughter, I lied about my qualifications. In turn, they lied about the job for which I was applying.

Had we not been so untruthful with each other, there might have been fewer night terrors stalking the inhabitants of the City. Fewer unexplained disappearances. Fewer deaths.

Now, nobody is safe from the vengeful spirits we’ve unleashed.

With no time to spare, we face an impossible task: we must discover the mysteries in metal in order to right this wrong.

But is it already too late?

The Mysteries in Metal series combines gaslamp fantasy, a little paranormal spookiness, a touch of romance and thrills, twists and turns. They’re clean, self-contained novels with occasional mild language. They do not end on a cliffhanger.

A Riddle in Bronze was a finalist in the 2019 Aurealis Awards, Australia’s premier prize for speculative fiction.