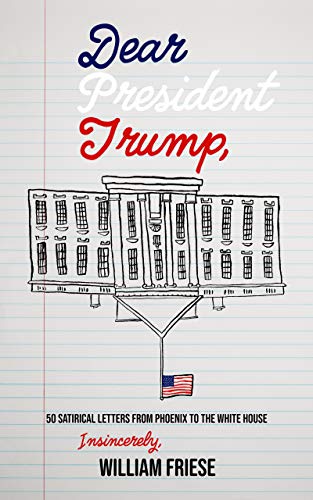 Dear President Trump began with a seemingly futile protest letter about killer vending machines. It became a spirited work of individual expression and a lifeline for the author’s sanity. In a collection of 50 satirical letters to the White House, first-time author William Friese channels his frustrations with President Trump’s administration. Written from the viewpoint of an ardent supporter, the letters document major political events and comically highlight the Trump administration’s tenure of dishonesty and incompetence.

Obama and his administrators are children on the beach building sandcastles. One castle is Obamacare, another is Clean Energy, another is National Monuments, etc… Then you come walking along the beach, a big, tall, tough president, and kick over all the sandcastles. Funny! Right?! Pardoning Arpaio is like kicking over a Justice sandcastle. Except that castle was created by the Constitution.

Business Insider just published a shocking article about Jim Bridenstine, director of NASA. It said he changed his opinion on climate change because he “read a lot.” Can you believe this? Somebody in your administration is reading and, worse, learning. You need to nip this outlandish behavior in the bud before it spreads to others in the administration.

I know you are upset about your impeachment. I would be too! Those stupid, lazy Democrats only brought two articles of impeachment. It’s so unfair how they treat you. Andrew Johnson got eleven articles.

As of last month, you had made over 18,000 false and misleading claims —that is 15 per day. Simply amazing! No president will ever outdo that. I bet you are giving Vladimir Putin and Kim Jong-un a run for their money. Those two autocrats have it easy. They don’t have to deal with the “fake” news like you do here. In their countries, they have real fake news.