From Time.com: Seventy-five years after George Orwell’s Animal Farm was published, Téa Obreht writes, we may want to heed the story’s lessons now more than ever…  Support our news coverage by subscribing to our Kindle Nation Daily Digest. Joining is free! 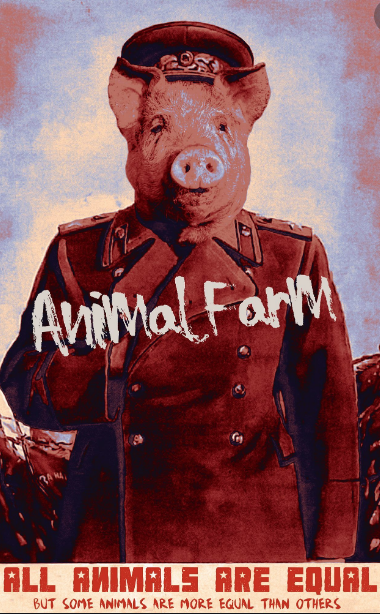 It’s been 75 years since the comrades of the once (and future) Manor Farm first took up the anthem “Beasts of England” and surprised themselves by routing out the tyrant farmer, Mr. Jones, from his holdings. Seventy-five years since the seemingly inalterable tenets of Animalism were scrawled in white paint on the side of the barn, and the enthusiastic dreamer Snowball strove for his short-lived utopia before running afoul of the Berkshire boar Napoleon’s autocratic ambitions.

In the decades since the publication of George Orwell’s seminal work of anti-Stalinist satire, we have seen the collapse of the regime that disturbed and inspired its author; the beginning and end of the Cold War, with all its attendant horrors; and the rise and fall of any number of would-be Napoleons, both at home and abroad. Animal Farm, once a work so controversial that it seemed unlikely to find a publisher, has served for so long, and in so many school curriculums, as the predominant introduction to the concept of totalitarianism that it is in danger of being perceived as trite.

With Animal Farm, Orwell—then a 42-year-old democratic socialist known primarily for essays and journalism exploring social injustice and class iniquities across Europe—hoped only to dissuade his countrymen from what he recognized as a dangerous infatuation with Joseph Stalin. It is indisputable that an author’s intentions for his or her work usually don’t survive publication, let alone the author’s death. Nothing of Animal Farm’s success during Orwell’s lifetime could really augur the varied purposes it would come to serve, or the global behemoth it would quickly become. Pushing back on a critique that Orwell was too light-handed in his reproach of totalitarianism, Julian Symons wrote, “In a hundred years’ time perhaps, Animal Farm may be simply a fairy story, today it is a political satire with a good deal of point.”

That was then, and this is now. Luckily, having spent the last seven and a half decades heeding its warnings and taking its lessons to heart, we have pulled ahead of the dangers Animal Farm hinted we might one day face. As a species, we have defied Orwell’s wildest expectations. Wouldn’t he be thrilled to know that we no longer have need of a text that so explicitly decries authoritarianism, fearmongering, tribalism, historical erasure, factual manipulation and war as an engine of national pride?