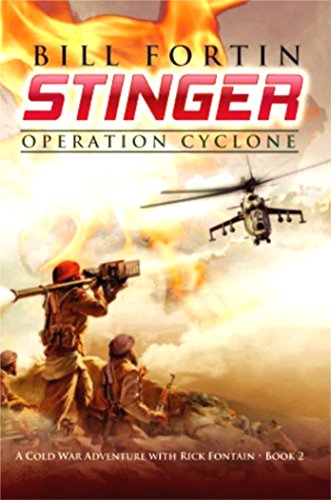 A Cold War adventure that peers inside the exploits of Senator Charlie Wilson and CIA’s Task Force Chief Gust Avrakotos. Strange bedfellows they were… their alliance proved to be one of the most successful partnerships in the history of the CIA. Stinger: Operation Cyclone centers on the results of these efforts.

The adventure begins with the election of Ronald Regan in 1979. This was the same year that the Soviet Union invaded Afghanistan. Early in 1982 POTUS called for a plan of action to arm and finance the Jihadi warriors known as the Mujahideen. Operation Cyclone was the code name assigned to this project.

CIA Officer Mike Vickers, not a participant in this story, was solicited by Avrakotos to help design and roll out the blueprint to equip the Mujahideen. Included in this Covert Action program was the Stinger guided missile. This weapon system would be credited as the major factor in the Russian withdraw in 1989.

General Gerald Bushman returns as the Director, Defense Intelligence Agency. Rick Fontain, who was now a Member, Technical Staff of AT&T’s Bell Labs, is brought in for his expertise with the Stinger technology. His familiarity with the Russian gunship, the Mil Mi24 was just icing on the cake.

Rick is re-united with his Redeye instructor, Andy Davis, and together they would lay out a plan to kill buku Russian aircraft. However, the operation stalls in 1982 and would not move forward until Rick thwarts an assignation attempt on one, Maalouf Torki bin Taisei. Mr. Taisei is a Malaysian government official. He is also the largest arms dealer on the Pacific Rim.

The KGB gets wind that the Pakistan ISI has agreed to support Operation Cyclone. Their attacks are fierce. However, the result was not what they expected. President Regan issued a change to the original operation requirements. The gloves were to come off. Rick Fontain is told to do whatever it takes to get Stinger into the hands of the Afghan Freedom Fighters.

In 1985 President Zia finally OK’s the American plan to provide the Stinger technology to the Mujahideen. American Special Forces, the Green Beret and DELTA, were assigned to the training center at the ISI’s Ojhri Camp. CIA’s, LTC Jim Pezlola and CWO Gary Larson, solicit the Mujahideen Command to provide students for the very first class of Stinger shooters.

Rick takes the graduating class into Afghanistan to the Russian airbase at Bagram. The rest… as they say… is history. Operation Cyclone may not have ended the Cold War, but it certainly had weakened the Soviet Union’s resolve. So much so that in 1993 it financially collapsed.

Click Amazon’s ‘look inside’ to start reading the first chapter and order your copy of this action-packed, fast-moving military Cold War thriller today.