These fiction and non-fiction selections show how women are affected by climate change and how they’re fighting back….  Support our news coverage by subscribing to our Kindle Nation Daily Digest. Joining is free right now! 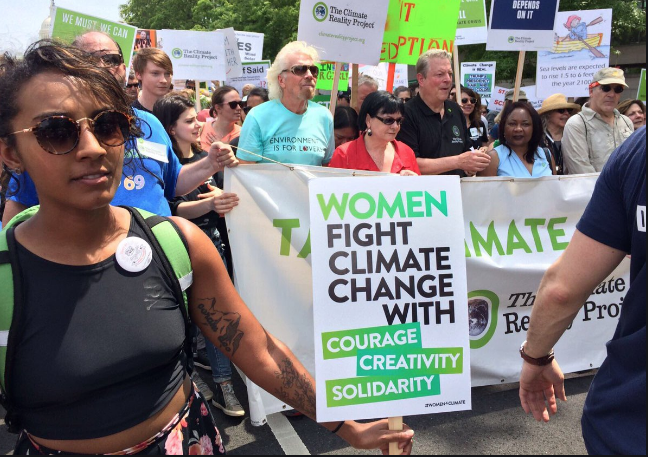 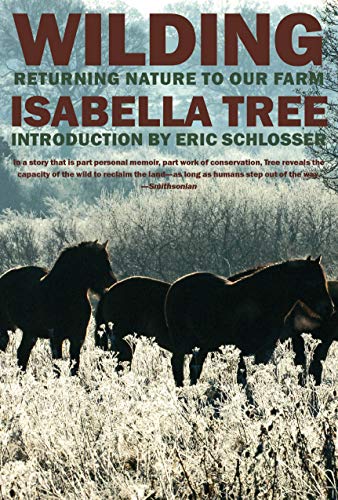 Wilding: Returning Nature to Our Farm
by Isabella Tree

An inspiring story about what happens when 3,500 acres of land, farmed for centuries, is left to return to the wild, and about the wilder, richer future a natural landscape can bring.

For years Charlie Burrell and his wife, Isabella Tree, farmed Knepp Castle Estate and struggled to turn a profit. By 2000, with the farm facing bankruptcy, they decided to try something radical. They would restore Knepp’s 3,500 acres to the wild. Using herds of free-roaming animals to mimic the actions of the megafauna of the past, they hoped to bring nature back to their depleted land. But what would the neighbors say, in the manicured countryside of modern England where a blade of grass out of place is considered an affront?

In the face of considerable opposition the couple persisted with their experiment and soon witnessed an extraordinary change. New life flooded into Knepp, now a breeding hotspot for rare and threatened species like turtle doves, peregrine falcons, and purple emperor butterflies. 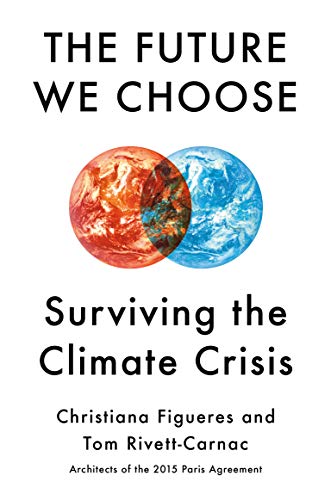 The Future We Choose: Surviving the Climate Crisis
by Christiana Figueres and Tom Rivett-Carnac

Climate change: it is arguably the most urgent and consequential issue humankind has ever faced. How we address it in the next thirty years will determine the kind of world we will live in and will bequeath to our children and to theirs.

In The Future We Choose, Christiana Figueres and Tom Rivett-Carnac–who led negotiations for the United Nations during the historic Paris Agreement of 2015–have written a cautionary but optimistic book about the world’s changing climate and the fate of humanity.
The authors outline two possible scenarios for our planet. In one, they describe what life on Earth will be like by 2050 if we fail to meet the Paris climate targets. In the other, they lay out what it will be like to live in a carbon neutral, regenerative world. They argue for confronting the climate crisis head-on, with determination and optimism. The Future We Choose presents our options and tells us what governments, corporations, and each of us can and must do to fend off disaster. 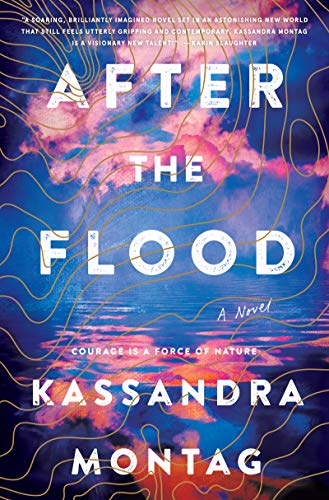 After the Flood: A Novel
by Kassandra Montag

An inventive and riveting epic saga, After the Flood signals the arrival of an extraordinary new talent.

A little more than a century from now, our world has been utterly transformed. After years of slowly overtaking the continent, rising floodwaters have obliterated America’s great coastal cities and then its heartland, leaving nothing but an archipelago of mountaintop colonies surrounded by a deep expanse of open water.

Stubbornly independent Myra and her precocious seven-year-old daughter, Pearl, fish from their small boat, the Bird, visiting dry land only to trade for supplies and information in the few remaining outposts of civilization. For seven years, Myra has grieved the loss of her oldest daughter, Row, who was stolen by her father after a monstrous deluge overtook their home in Nebraska. Then, in a violent confrontation with a stranger, Myra suddenly discovers that Row was last seen in a far-off encampment near the Arctic Circle. Throwing aside her usual caution, Myra and Pearl embark on a perilous voyage into the icy northern seas, hoping against hope that Row will still be there. 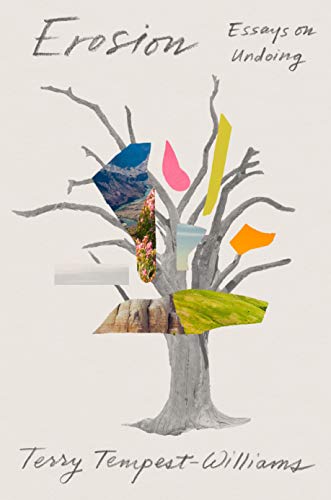 Fierce, timely, and unsettling essays from an important and beloved writer and conservationist

Terry Tempest Williams’s fierce, spirited, and magnificent essays are a howl in the desert. She sizes up the continuing assaults on America’s public lands and the erosion of our commitment to the open space of democracy. She asks: “How do we find the strength to not look away from all that is breaking our hearts?”

We know the elements of erosion: wind, water, and time. They have shaped the spectacular physical landscape of our nation. Here, Williams bravely and brilliantly explores the many forms of erosion we face: of democracy, science, compassion, and trust. She examines the dire cultural and environmental implications of the gutting of Bear Ears National Monument—sacred lands to Native Peoples of the American Southwest; of the undermining of the Endangered Species Act; of the relentless press by the fossil fuel industry that has led to a panorama in which “oil rigs light up the horizon.” And she testifies that the climate crisis is not an abstraction, offering as evidence the drought outside her door and, at times, within herself. 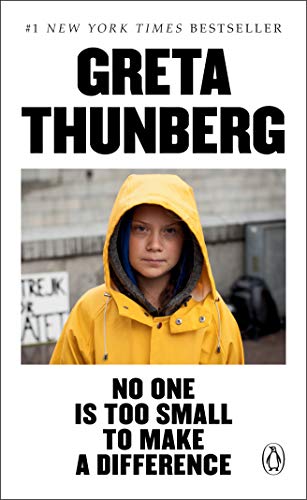 The groundbreaking speeches of Greta Thunberg, the young climate activist who has become the voice of a generation, including her historic address to the United Nations

In August 2018 a fifteen-year-old Swedish girl, Greta Thunberg, decided not to go to school one day in order to protest the climate crisis. Her actions sparked a global movement, inspiring millions of students to go on strike for our planet, forcing governments to listen, and earning her a Nobel Peace Prize nomination.

No One Is Too Small to Make A Difference brings you Greta in her own words, for the first time. Collecting her speeches that have made history across the globe, from the United Nations to Capitol Hill and mass street protests, her book is a rallying cry for why we must all wake up and fight to protect the living planet, no matter how powerless we feel. Our future depends upon it. 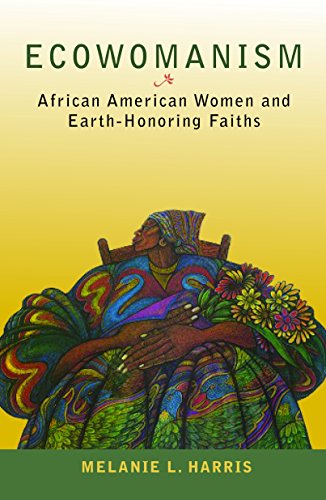 Scholarship on African American history and culture has often neglected the tradition of African American women who engage in theological and religious reflection on their ethical and moral responsibility to care for the earth. Melanie Harris argues that African American women make distinctive contributions to the environmental justice movement in the ways that they theologize, theorize, practice spiritual activism, and come into religious understandings about our relationship with the earth. Incorporating ele­ments of her family history to set the stage for her argument, Harris intersperses her academic reflections with her own personal stories and anecdotes. 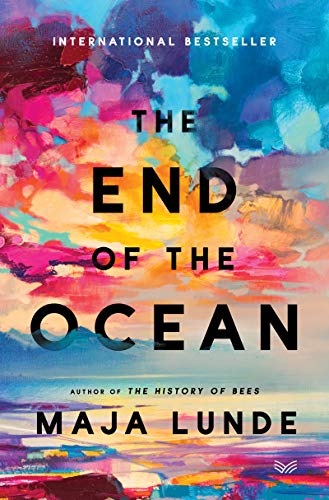 The End of the Ocean: A Novel
by Maja Lunde

From the author of the number-one international bestseller The History of Bees, a captivating story of the power of nature and the human spirit that explores the threat of a devastating worldwide drought, witnessed through the lives of a father, a daughter, and a woman who will risk her life to save the future.

In 2019, seventy-year-old Signe sets sail alone on a hazardous voyage across the ocean in a sailboat. On board, a cargo that can change lives. Signe is haunted by memories of the love of her life, whom she’ll meet again soon.

In 2041, David and his young daughter, Lou, flee from a drought-stricken Southern Europe that has been ravaged by thirst and war. Separated from the rest of their family and desperate to find them, they discover an ancient sailboat in a dried-out garden, miles away from the nearest shore. Signe’s sailboat.

As David and Lou discover Signe’s personal effects, her long ago journey becomes inexorably linked to their own.

An evocative tale of the search for love and connection, The End of the Ocean is a profoundly moving father daughter story of survival and a clarion call for climate action.