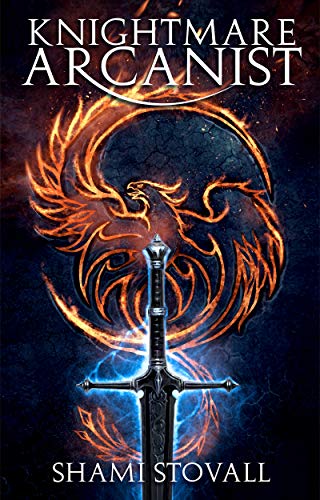 Magic. Sailing. A murderer among heroes.

Gravedigger Volke Savan wants nothing more than to be like his hero, the legendary magical swashbuckler, Gregory Ruma. First he needs to become an arcanist, someone capable of wielding magic, which requires bonding with a mythical creature. And he’ll take anything—a pegasus, a griffin, a ravenous hydra—maybe even a leviathan, like Ruma.

So when Volke stumbles across a knightmare, a creature made of shadow and terror, he has no reservations. But the knightmare knows a terrible secret: Ruma is a murderer out to spread corrupted magic throughout their island nation. He’s already killed a population of phoenixes and he intends to kill even more.

In order to protect his home, his adopted sister, and the girl he admires from afar, Volke will need to confront his hero, the Master Arcanist Gregory Ruma.

A fast-paced fantasy with magical creatures for those who enjoy the Furies of Calderon (Codex Alera series) by Jim Butcher, Unsouled (Cradle Series) by Will Wight, and Percy Jackson and the Olympians by Rick Riordan.

“A spellbinding first installment of what promises to be an addictive series, Shami Stovall has produced a mesmerizing story of magic, intrigue, and true adventure.” – ManyBooks

“Richly crafted and laced with wry humor and intriguing magic, Knightmare Arcanist is a page-turner.” – The Prairies Book Review