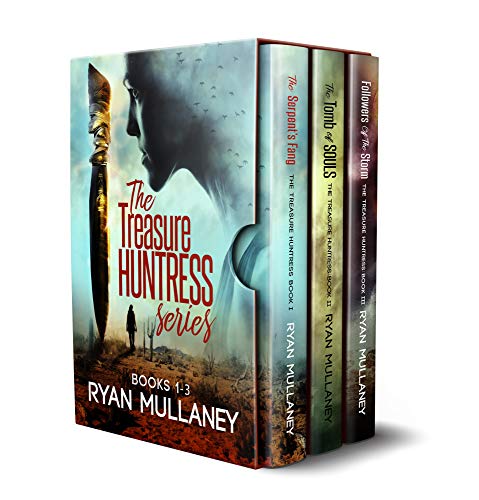 – Learn More
Text-to-Speech and Lending: Enabled
Enjoy Ryan Mullaney Books? Tell us why and WIN a chance for a FREE ebook!
Here’s the set-up:

“I’m so glad I came across this series. Simone’s character journey is unexpectedly complex and gripping. She’s undoubtedly one of the most emotionally interesting and human characters the action/adventure genre has to offer.” -Goodreads review ★★★★★

This summer’s hottest read! Dive into the adventures of heroine archaeologist Simone Cassidy as she explores mountain peaks and desert valleys in the hunt for the world’s most sought-after and deadly artifacts. Get in on the action now!

Book 1 – THE SERPENT’S FANG
An ancient Aztec dagger used in ritual human sacrifice – a simple relic, or a weapon of unfathomable power that must not fall into the wrong hands? Joining forces with the shady Clark Bannicheck, Simone digs into the mystery of The Serpent’s Fang while working to uncover the truth about her past.

Book 2 – THE TOMB OF SOULS
Simone is tasked to locate The Fallen Star, a fabled relic with impossible healing abilities. With a ruthless Saudi prince, an unscrupulous weapons dealer, and a vengeful assassin all closing in, Simone finds herself in the most perilous quest of her life.

Book 3 – FOLLOWERS OF THE STORM
A fanatical religious cult has seized a mysterious Viking runestone, putting the life of one of Simone’s closest friends in jeopardy. Vowing to return the runestone, Simone sets off on a journey that blurs the lines between ally and enemy, right and wrong, good and evil.