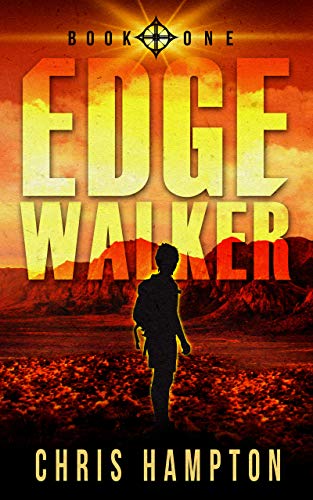 The city burns.  Orange against black night.  Over his left shoulder hangs a blood-red moon.  Four days and four nights, the city has burned and, soon, people will come into the desert to escape death in the city.  Sick and hungry, the people will be crazy, killing anything to live, and they will come in his direction.  Hunting.

Sporadic flashes erupt in the far-off city.  Metal dragons, small shiny ships, exhale fire.  He saw the ships and their death up close, four nights ago when he fled the house, the city.  Now, he watches.

Overnight, the world has changed.  A deadly virus thrusts the country into chaos.  Barely escaping, a fifteen year old boy flees to the unforgiving desert to take his chances with thirst, starvation, and isolation.  His greatest fears live there, as does the mysterious hope his grandfather gave him.  Exposed and vulnerable, he comes face-to-face with his deepest terror in the gripping tale of Edge Walker.